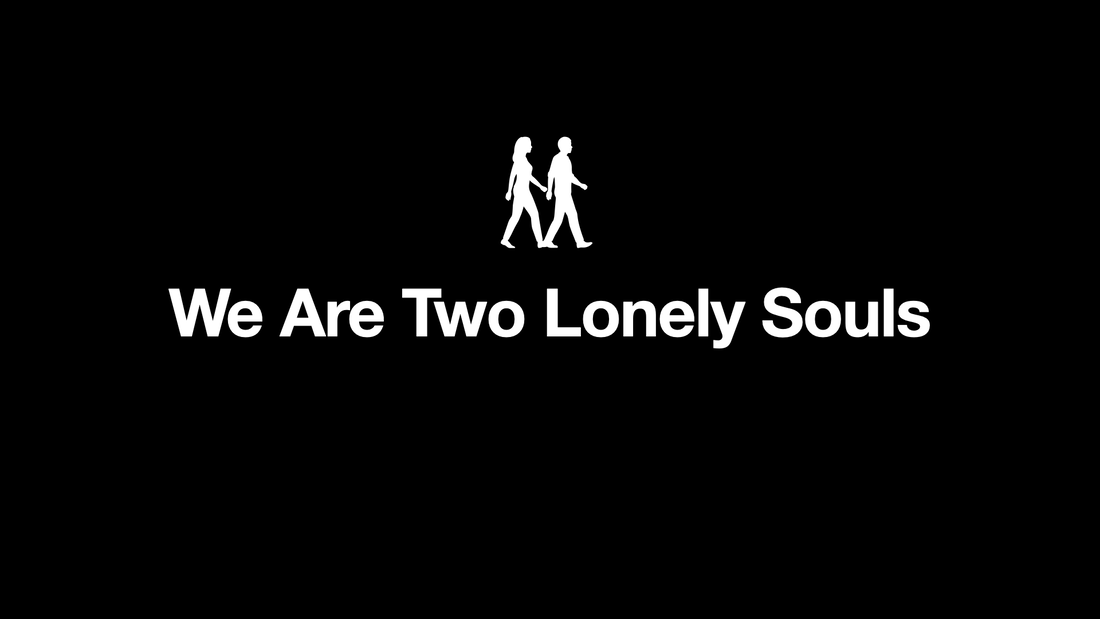 We are two lonely souls walking a deserted college campus seeking physical exercise and mental clarity on Day One of the Covid-19 Pandemic. In the distance, a man on a riding mower manicures a grassy field of green. He sees us from afar. He waves. A man of stature. Retired military, I wonder? So I raise my right hand to my brow in salute, which he returns. My wife waves to him as we move on. We are three lonely souls on a deserted college campus.​
Returning for Day Two of physical exercise and mental clarity, we are yet again the only walkers seeking solitude on the deserted college campus. Sure enough, the man on the riding mower sees us on a distant hillside. A black mask covers his face. Not in fear of the virus, we surmise, but more to shield his lungs from the excessive grass pollen. He continues his mowing as he salutes us. I return his salute, my wife waves to him, and we two move on. We are three lonely souls on a deserted college campus.​
Day Three confirms our new ritual. We eagerly salute and wave to our new friend. He just as eagerly responds. We two devote the remainder of our walk to discussing how wonderful it is to construct a respectful friendship. At a distance, no less. We are three lonely souls on a deserted but glorious college campus.​
Day Four. Our new friend suddenly appears before our eyes. Closer than yesterday. Smile unhidden by a mask, we notice his silver goatee. He can’t help but notice mine. Our skin colors? Meaningless. Our smiles say it all.​
The days pass, often without seeing our valued friend. After all, we’re merely aging walkers, immersed in our half-century tradition of exercise and clarity together. He, on the other hand, is a working man with responsibilities. Sometimes we even worry about him. But on this cloudless and sunny morning our new friend drives a trio of subordinate workers down a dirt service road. Only yards away from us, he stops his truck, laughs loudly out the driver’s window, and speaks to us for the first time. “Well, well, well! How are y’all doin’ on this beautiful day?” His colleagues chuckle, unafraid to show their sincere liking for this man. We share their communal laughter. And the moment. The months pass quickly. Our respectful friendship and trust grow. But as if from the depths of a satanic nightmare, a wicked, unexpected new Pandemic of a very different nature invades our peaceful solitude.​
Demonstrations immediately erupt in the streets of America, soon followed by worldwide
riots of solidarity ​in the “Black Lives Matter” citizen chant of “I Can’t Breathe.”
​ 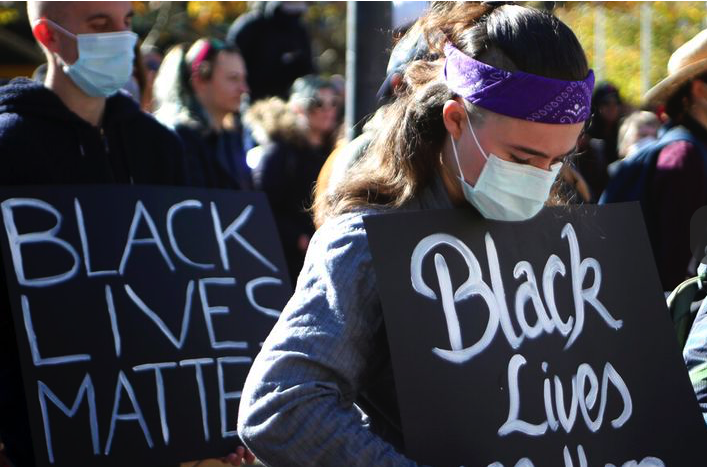 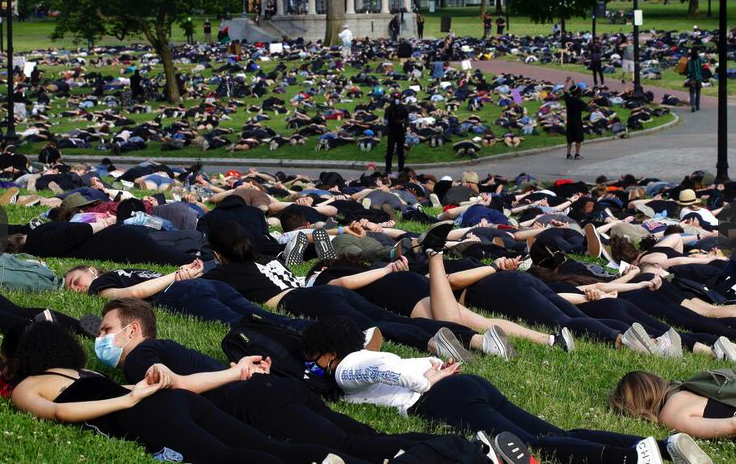 An unhinged president Tweets his incredulous conspiracy theory diatribes to deflect attention
from his own weaknesses and failings. A desperate administration closes their eyes,
covers their ears, and overlooks their president’s hatred for all but himself, looking every way but backward
in their hope that the November election only months from now will deliver them
​from the fear of being voted out of their coveted governmental seats of absolute majority power. ​ 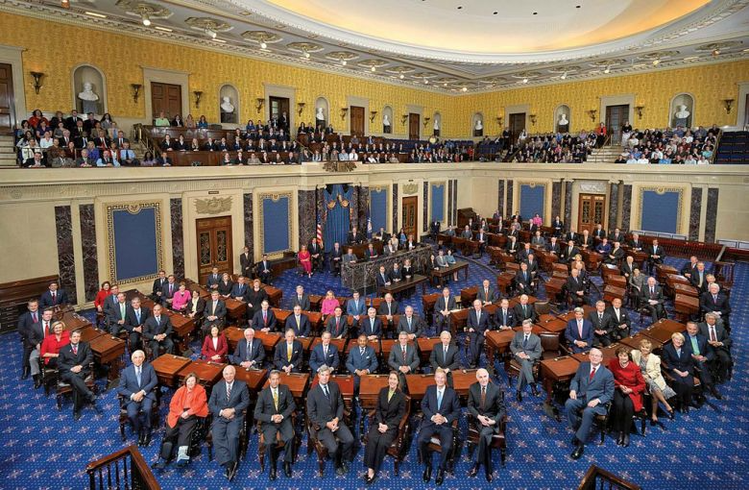 Thus, the demonstrations persist in ways never before seen in years past.
​ 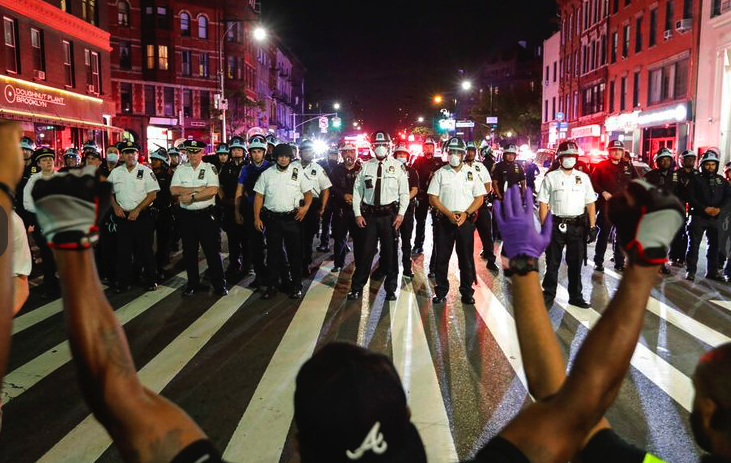 ​
Protestors by the hundreds-of-thousands demand a new reality after too many years of discrimination.
We are Young.
We are Old.
We are Multi-Ethnic.
We are Multi-Racial.
We are Multi-Colored.
We are One Nation.
​We are United in our demands for immediate action and meaningful change.
​ 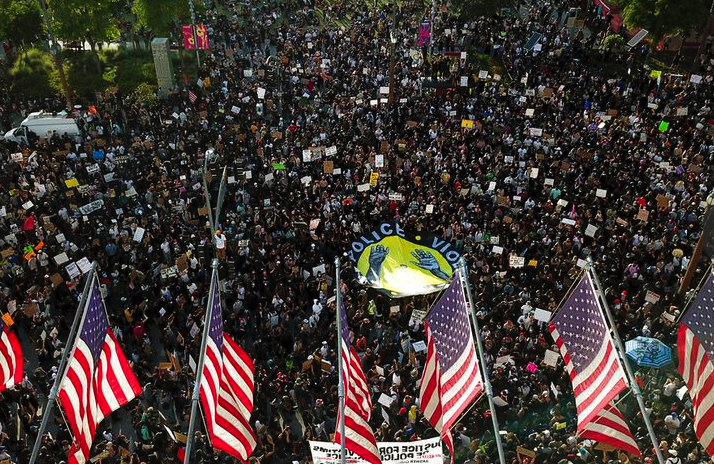 With Liberty and Justice For All. Albeit 400 years too late.
​

And yet something feels very different this time. Our nation and its peoples are listening.
​And they are heeding the peaceful chants from the growing throngs of demonstrators in the streets.
​ 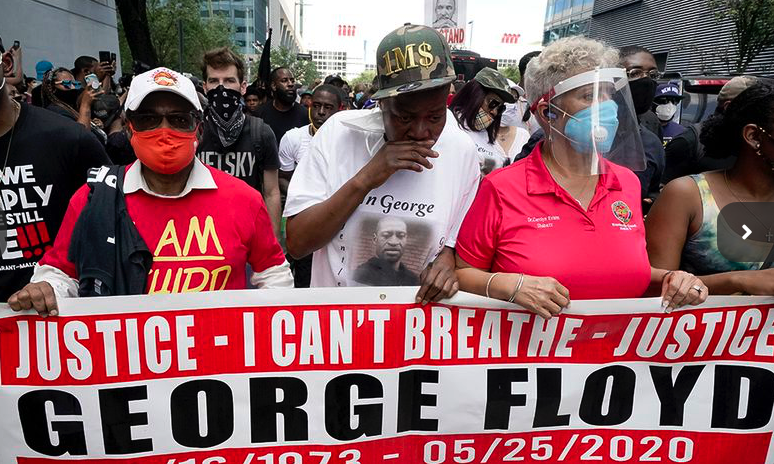 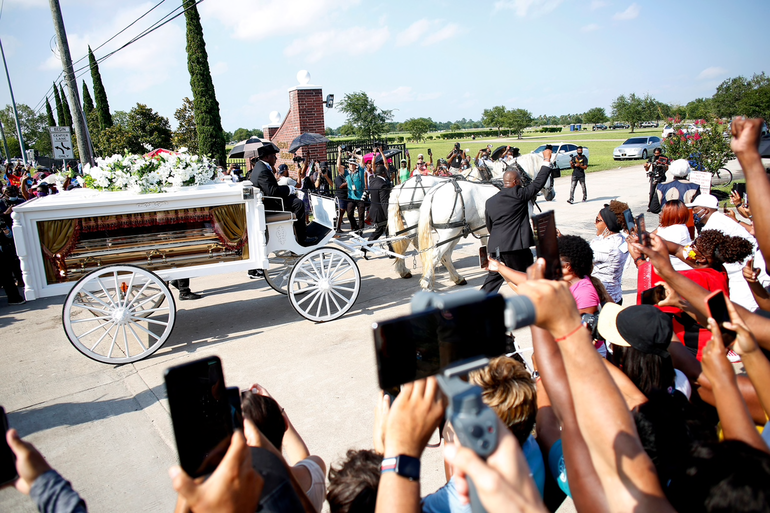 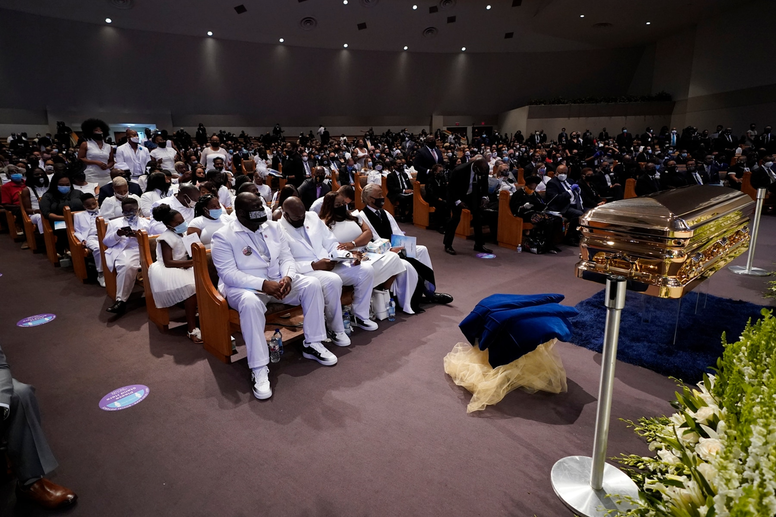 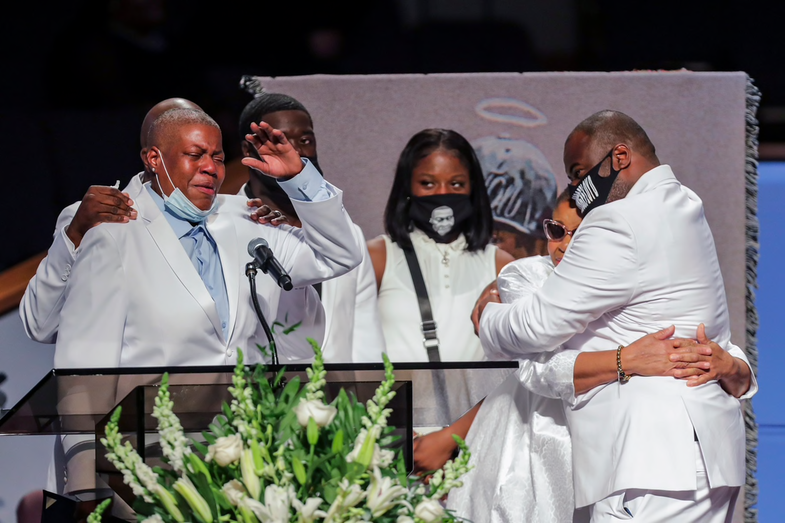 The unhinged president escalates his vicious Tweet attacks, his chosen method of communicating
with his followers, disparaging anyone and everyone who challenges his divisive taunts.
​He builds his coveted walls around the White House grounds.
​ 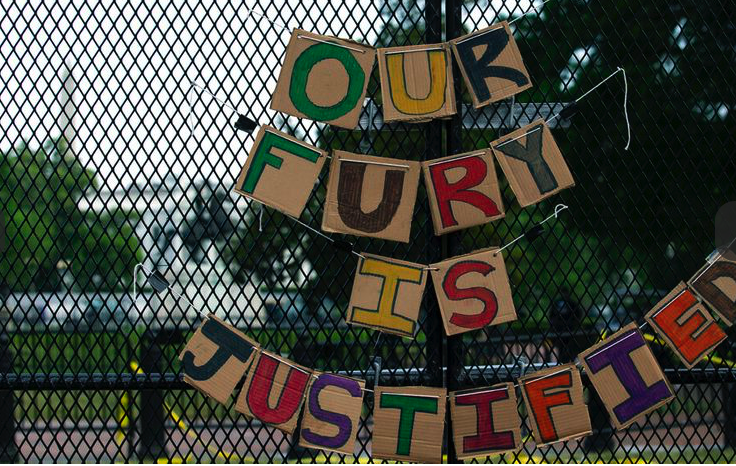 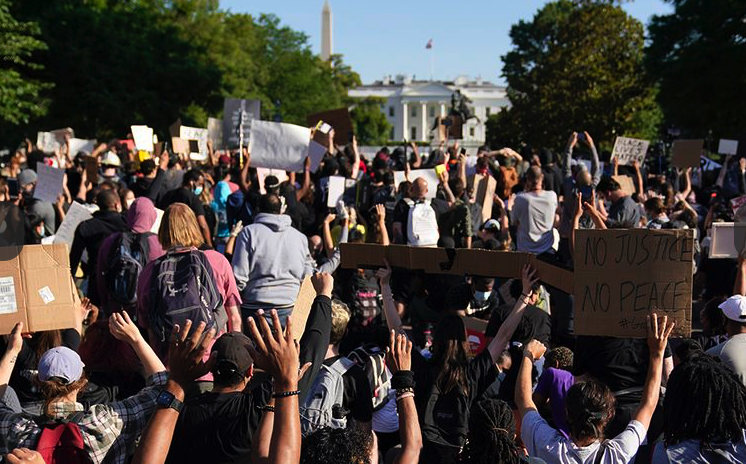 He orders police and national guard troops to violently drive peaceful protestors into the streets while
​he stages a photo op, displaying a bible in his hand as if he knew or cared what was written within.
​ 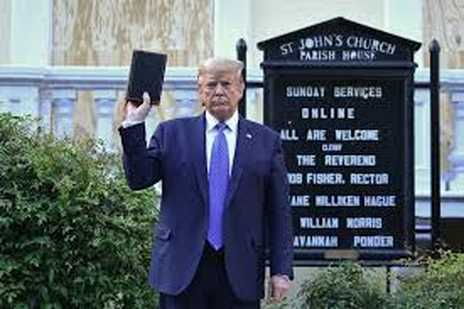 In a panic, he threatens to enact the 1807 Insurrection Act to deploy active duty troops across the USA
to quell the protests in the streets, utilizing the military to wage war on the citizens he and they
are entrusted to serve. In response, the protests grow larger and stronger.
He retreats to the bunkered safety of the People’s House, by now surrounded
by taller and stronger metal fencing. No different from his ballyhooed construction
of a wall separating America’s southern border with Mexico, yet to be completed.
​Keeping everyone out is more his mantra than allowing anyone in.​

We two lonely souls continue our daily walks seeking physical exercise and mental clarity, all the while looking forward to seeing our friend. And there he stands. Off in the distance, standing beneath a tree. But today, we three simultaneously thrust our tightly clenched fists to the heavens in solidarity. Indeed, we are three united souls on a deserted yet glorious college campus.​ 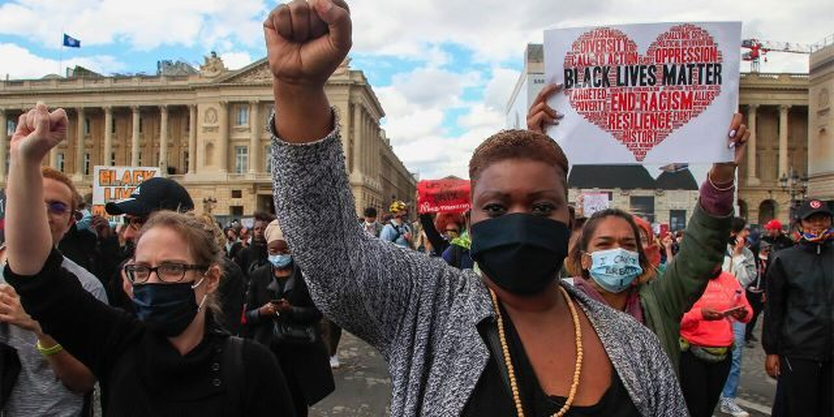