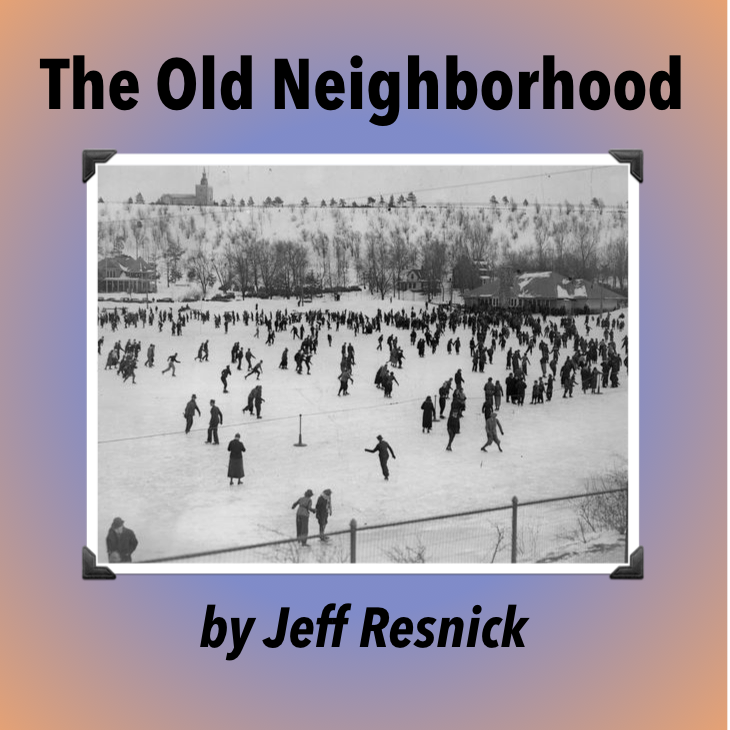 ​I was raised in the Cobbs Hill neighborhood in Rochester, New York. Notice, I didn’t say I grew up there. Big difference! 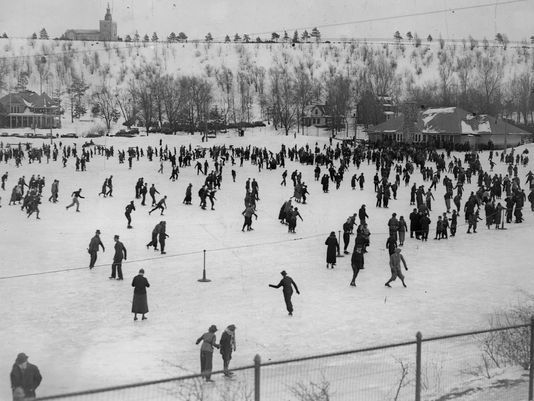 ​Eastman Kodak was still a vibrant company, the very foundation of the city. Nobody had yet heard of digital cameras, let alone the global marketplace. 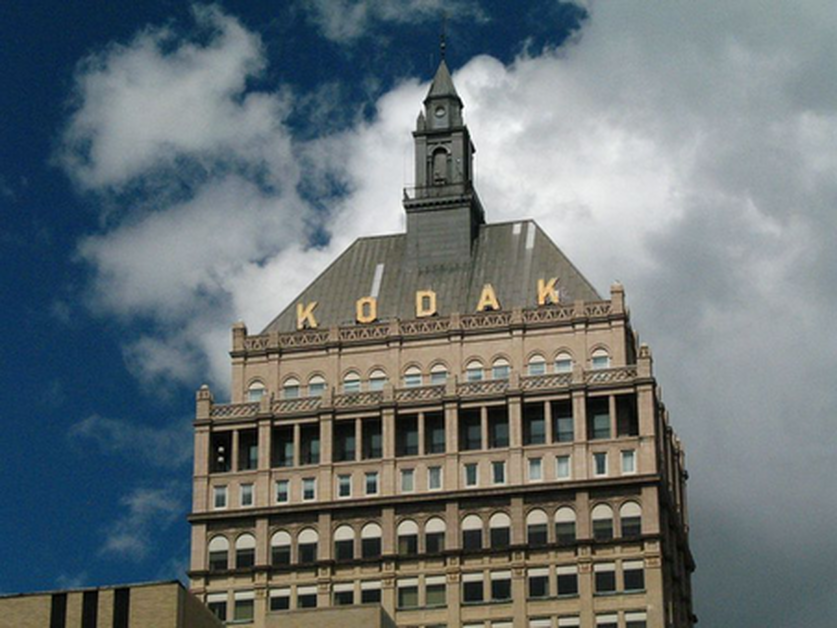 ​My block-long, one-way street looks the same today as it did in the 1950’s. Street-parking on alternating days, with room for only one car to drive the street at a time. Just five single houses, four side-by-side duplexes, and three 4-unit apartment buildings. The duplex I called home is still there today, the only outward difference being the paint color. Indeed, none of the houses and apartments seem to have changed, other than the people who now live there call them their homes. As I remember it, my house seemed large. But the last time I visited, and was invited to enter my boyhood home by the current owner, I was shocked by how small it really was. Maybe you’ve seen that Tamiflu TV commercial about the big guy who has the flu, and is squeezed into the smallest possible room as if he were a sickly giant living in a tiny doll house? That’s the feeling I had on that last visit decades ago. (Yep, this picture was me in the late 1960's. And my dad even let me in the front door!) 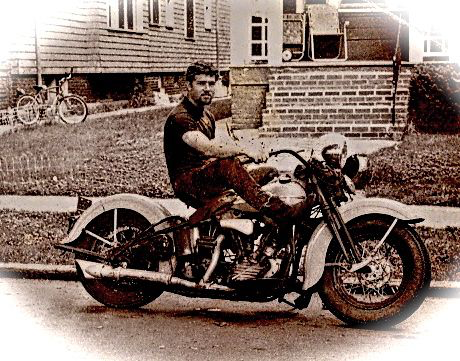 ​We lived on the left side of the duplex. Father, mother, older sister, and younger brother.  The right side of the duplex was home to aunt, uncle, grandmother, and two cousins, both girls. I guess my dad was quite handy with a hammer, because he was always making improvements for both families. How could I forget the laundry chute that ran inside the wall from the second floor into the basement, allowing us to deposit the day’s dirty clothes for a fast ride to the wringer washing machine two floors below? Of course, the two sides of the duplex were mirror images. So my Dad cut out an opening between the two side-by-side laundry chutes, creating a kitchen-to-kitchen pass-through between the two homes. My earliest memories are of being passed from house-to-house by my mother into the waiting arms of my aunt on the other side. I’m sure there’s some deep meaning to that rite of passage, but it hasn’t come to me yet! I should ask my younger brother. He’ll know. After all, he’s the philosopher in the family. Luckily, no child was ever dropped by mistake into the cellar. But don’t tell my brother I told you that. To this day, he still thinks he was dropped on his head. By me. On purpose. Would I do that? Of course not!

Dad also opened up the full-house attic by removing the walls between the two sides, creating a unique and functional private play area for all the kids to enjoy together. It also guaranteed that we would spend less time making noise downstairs. Smart move. I still remember those week-end sleepovers, interrupted by adult warnings from below on both sides.

“Time for bed! Quiet down! Now! Or else!”
​
Strange that we cousins never seemed to share that space. They had their friends, we had ours, and the twain never met. But that attic made it really easy for anyone, parents included, to visit the other side…sounds paranormal…without having to put on boots, coats, gloves, and everything else that took hours of preparation. One big, happy family, it seemed at the time. What more could we ask for? A quick two-minute walk from Berkshire Street took you to Culver Road. Turn right, and 100 yards later you arrived at a bridge over the trolley car that traveled to downtown Rochester. 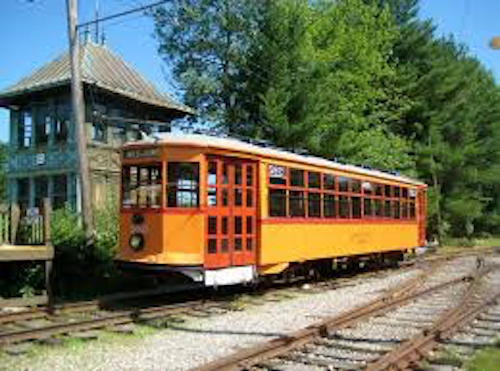 If I remember correctly, Culver Road was the last stop to the east. Or the first, depending on your starting point! The trolley is a quickly fading memory for me, but I do recall that I loved walking down the wooden steps from the bridge to the wooden loading platform below. The trolley was one car only, as opposed to what today we would call a train. Very quaint. Graced with wood siding and electric lines overhead. For the grand total of a nickel, my mom and I could travel downtown for a day of shopping in the big city of Rochester! Another nickel to get home. Today, I appreciate the nostalgia in song lyrics like, 'clang-clang-clang goes the trolley.' Our trolley ride was something I always looked forward to.
​
But urbanization was coming to town in a hurry. I couldn’t have been more that five or six-years-old when the trolley line was removed and converted into a concrete automobile expressway, two lanes in each direction. Of course, the electric lines had to be removed, and the original trolley path had to be drastically expanded and paved to accommodate the cars and trucks that would soon invade our once peaceful neighborhood. This expansion was right on the edge of the man-made Lake Riley in Cobbs Hill. Its size was reduced dramatically, and we all wondered how that would affect our winter ice skating. Luckily, neighborhood protests resulted in an expansion of the lake soon thereafter. How dare the city movers and shakers even think about taking away our best fun of the winter!

During endlessly long summer vacations from school, by the second day we kids gathered outside on our bikes, banished from the house by our parents, with nothing but a sandwich bag- lunch.

“I dunno, whatta you wanna do?”

Good thing for us, Cobbs Hill was just around the corner. And what a bee-hive of activity it was. We rode down a path to one of the giant fields where we saw dozens of other kids sitting in a circle around a group of adults, each with a badge on his shirt.

We looked at each other only for a moment, then dropped our bikes to the ground and joined the sit-down circle. Little did we know that we were about to join our first summer day camp. No sign-up sheets. No rules. And no homework! If you enjoyed yourself the first day, you came back the next day. If not, no big deal, tomorrow was another adventure.

“Pow-wow time,” the counselors announced.
​
More confusion on our part, but we had nothing else to do, so why not? By now, there must have been at least 75 kids sitting around the circle. For the next two hours, we learned all about the Indian tribes native to our part of the country. The Cayuga; Iroquois; Oneida; Onondaga; Seneca; Tuscarora; and, Mohawk. Then we each joined a tribe in preparation for the day’s games. After a quick bag-lunch, we learned what turned out to be our absolute favorite game. It was called ‘Capture the Flag.’ One of the counselors carried a large flag into the middle of the field and planted its tall flag pole into the ground. The rules were simple. Each tribe would try to capture the flag from the field before another tribe could. But whoever had the flag  had to use teamwork to get it back to the starting point without being caught and tagged by another tribe. The only way to avoid being tagged was passing the flag off to another member of your tribe. If another tribe member tagged you, that tribe took the flag from you and continued the game. You’d be amazed at the ingenuity and teamwork this game required. ‘Capture the Flag’ always ended up lasting the rest of the day. There were never any arguments or fights. It was all about teamwork. The best part? All these years later, I still remember the names of the Indian tribes of Western New York. To this day, I am a proud member of the Mohawk tribe. 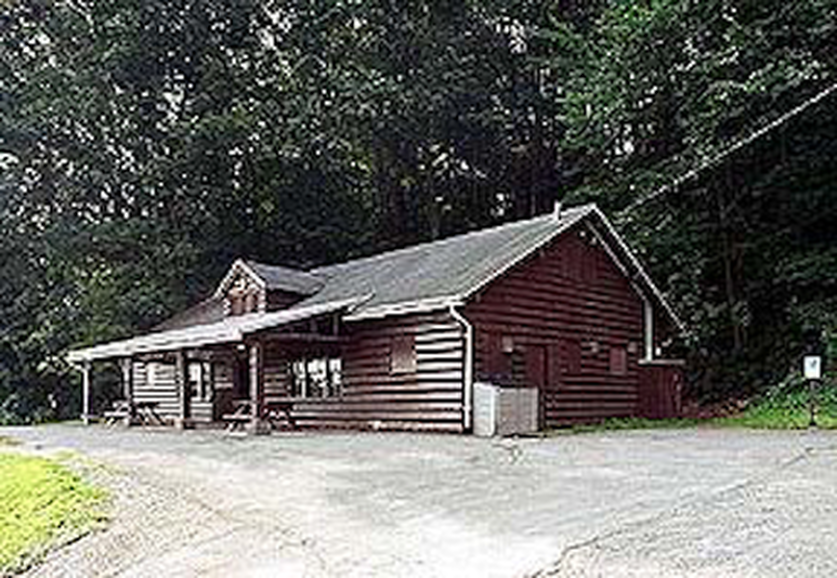 ​Every day was a different adventure, since every Cobbs Hill field hosted different activities. Summer Olympics. Baseball. Soccer. Half-court Basketball. Each one focused on the necessity of teamwork. Each was a learning experience. Each started and ended on the same day. And each and every one was pure fun. We kids needed no motivation to escape our houses early every morning, bag-lunch in our bike baskets. We became friends with kids from other neighborhoods. We learned together, played together, grew together. And today, I’m left to wonder if kids have these same opportunities in their neighborhoods. When you get right down to it, is there even such a thing as a neighborhood anymore?
​©  Jeff Resnick  2018
All Rights Reserved