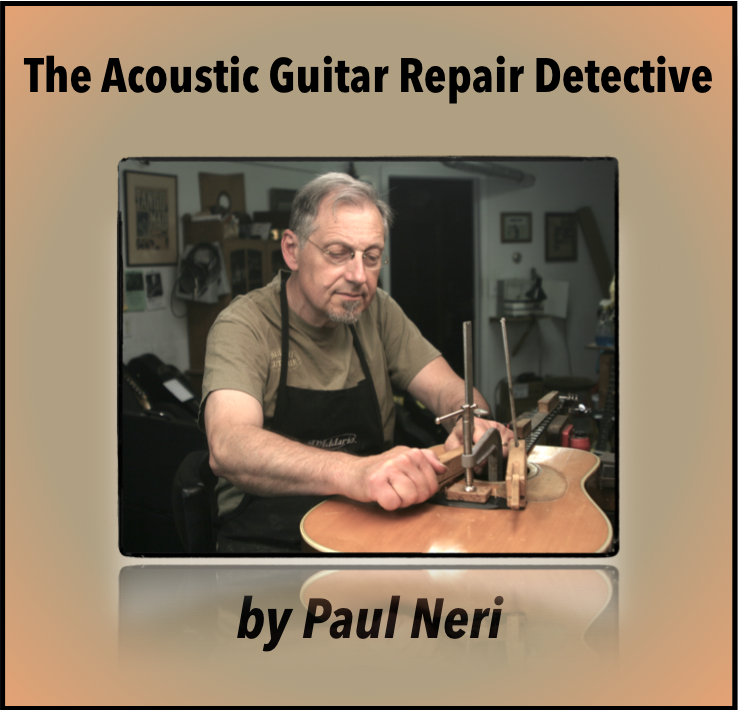 My name is Paul Neri. I’m a string instrument repairman who runs a shop out in Clinton, Connecticut. I’m known as a Luthier, or one who builds or repairs string instruments. It’s an old term taken from the French word for lute maker. There are no longer many lutes around so violin, mandolin, banjo and guitar makers have adopted the name. I came by this craft from being a musician and leatherworker.
​
I was born into a musical family with two brothers, a sister, and both parents playing violin, guitar, or piano. I started playing the drums as it came naturally. My poor parents had to listen to me playing in the adjacent room to the kitchen to “Wipeout” or the latest Beatle album. I always remember hearing my parents telling me to do what makes you happy but don’t make music your sole means of support. I had to try anyway, playing in a variety of rock, western swing, bluegrass and jazz groups and solo and duet guitar. My association with music throughout my 62 years has brought me joy and income both as a Luthier and a Musician.
​
I knew early on that college was not for me and just squeaked by in junior high because my straight A’s in 6th grade put me into all advanced placement classes. It humbled me,  solidifying my idea that I should stay with my natural musical talents, not further schooling. When I first heard the 5-string banjo played by Earl Scruggs I knew I had to learn it! As it was 1971, there was no easy way to learn it locally. Since I learned drums by myself it was only natural to do the same with the banjo. Listening to Earl Scruggs on vinyl at 16 speed so I could follow the fast three-finger picking rolls was a challenge. Television spots by John Hartford and Roy Clark playing the five-string banjo also inspired me. After winning a “Hire The Handicapped” state poster contest in my senior year of high school I had just enough money to buy a decent upgrade to my ailing beginner banjo. As I got better I became a fan of a local band that played weekly at Yale so I was able to hear and see live banjo playing.
​
In my senior year in high school our music theory teacher showed us that school was a good place to learn and play in more than just traditional band and orchestra. He started a jazz band called The Jazz Workshop. Jeff Resnick knew the value of producing not only a jazz ensemble but had the idea to give us free rein to form individual splinter groups to further strengthen our individual styles. This was not only a learning experience but after a successful school performance, a contestant in the Quinnipiac Jazz Festival in Connecticut, and a recording of our music on vinyl, it further solidified the idea that music is important, fun, and if you practice enough, good things can happen.

After high school and a 10-day bicycle trip to the White Mountains, I moved in with roommates who were also band mates. This was a great way to get together to practice in between our day jobs. Our bluegrass band, “Spacegrass,” played a lot of originals, toured some, opened for The New Grass Revival a few times, and won 1st place at the Middlebury Folk and Bluegrass Festival.
​
Living on a shoe string, I gave banjo lessons and made leather goods. My craft skills started with my father teaching me the craft at an early age. As an artist and photographer he was always keen on his children learning something related to the arts. I owe a lot to both my parents’ depression era frugality to get me through the lean years of learning guitar repair. It also helps to have the support of not only an understanding and artistic wife but one who is also frugal with a good paying nurse practitioner job. Thank you Eileen! 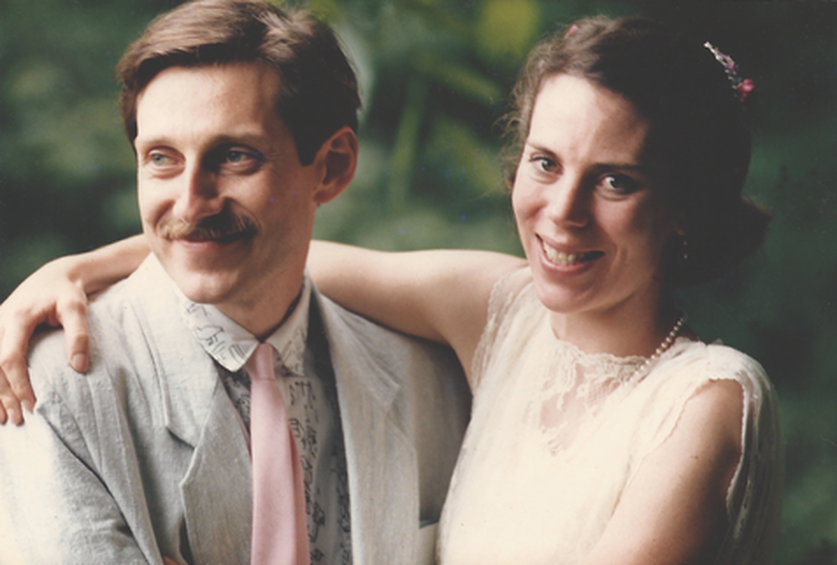 Paul and Eileen, Photo by Tom Shultz/Creative Attitude
My leatherwork led me to, and later apprentice to, a guitar maker who had bought some of my more artistically carved guitar straps. From 1980 through the present, I continue to repair and restore string instruments out of my home in Connecticut. I also played banjo with Connecticut Orchestra New England with Mitch Miller conducting “Rhapsody in Blue,” and recorded an instrumental bass and guitar CD called “Watercolors” with my good friend Dean Roumanis, a high school member of The Jazz Workshop who died suddenly in 2006.
​
After learning classical and flamenco techniques on guitar I formed a duo with my guitar teacher, Joe Tinari. “Las Guitarras” was born out of our love of all things Spanish. We developed and performed a program for libraries and schools called: “The Guitar in Spanish Music.” 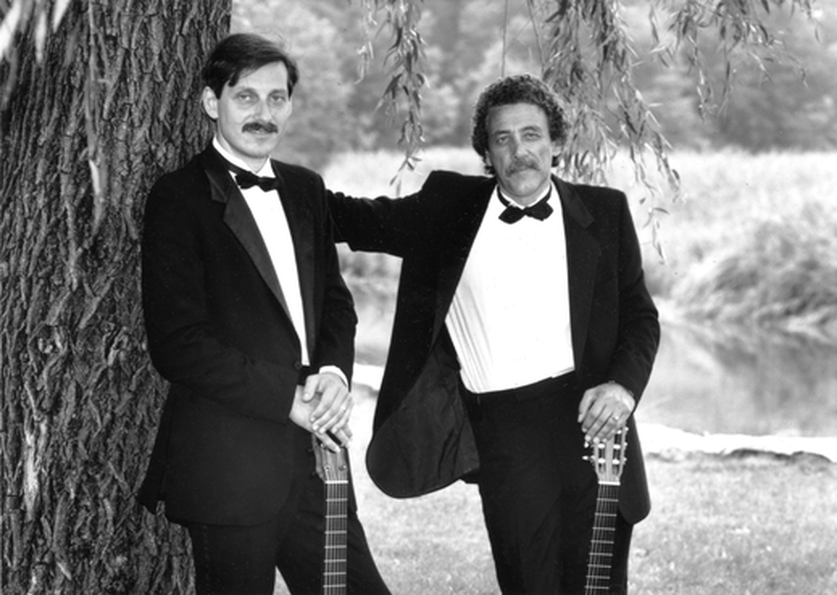 I am currently playing banjo in a trio called “The Kerry Boys.” 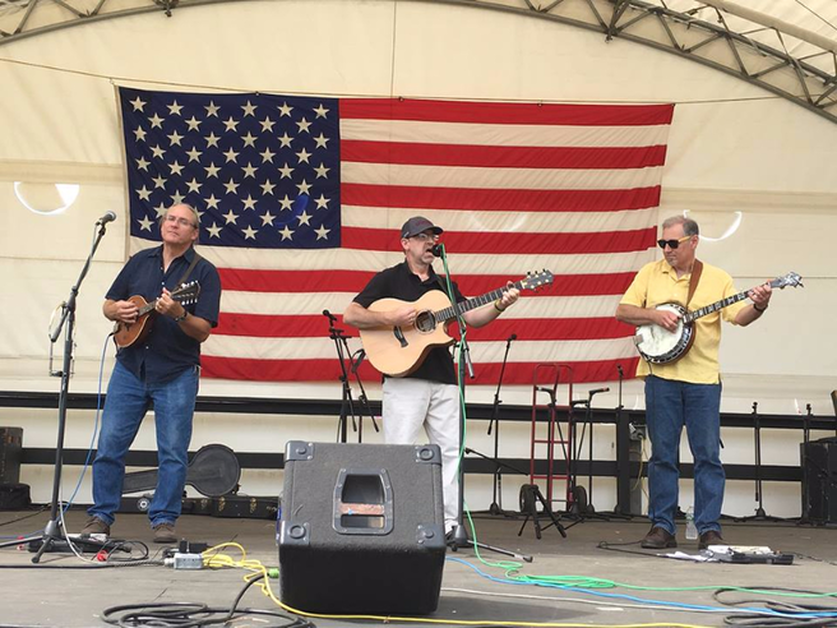 Pierce Campbell, Mark James, Paul Neri, The Durham Fair, Durham, CT, 2016
​
It is often said that everyone has a book they could write and it is also said to write what you know best. So, it is only natural that I should write about what I know best: fixing guitars. I wrote “The Acoustic Guitar Repair Detective.” My inspiration came when on vacation with friends in the bucolic hills of New Hampshire, I visited a book store and bought a how-to guitar repair book written by a well known Luthier. After reading through it I realized that a typical guitarist, whether a beginner or professional, with a desire to know basic knowledge of how to diagnose guitar related problems, would find his book and others like it much too technical. My angle was more focused on why things happen and how you can both know why problems arise and how to diagnose them. I worked on literally thousands of instruments since I started repairing so I had heard lots of myths being told about guitar problems and why they occur. AHA! I FOUND MY NICHE!

After writing the bulk of it during that New Hampshire vacation I let it sit but continued to refine it. I came up with the idea that I’m a detective and I’ll explore “cases” like: “How come my guitar doesn’t play in tune up the fretboard?” Or debunking myths like: “I was told never to adjust the neck truss rod with the strings fully tensioned.” My brother, a technical writer, helped me with editing but I still needed illustrations. I was stuck. After one more year of hoping my wife, a former illustrator and stain glass artist would have time from her busy job to illustrate my book, I remembered my neighbor was a crack illustrator and he volunteered to help me.

After two cases of wine … (as payment!) … 8 months later I had a finished book. With luck and support from my many customers I felt confident that my book would sell. I sent Hal Leonard, the leader in music related books, a query and subsequent mock up of the finished book and it was roundly rejected. SURPRISE! But here is the strangest thing: The publisher told me that the book looked fine but because they had already published me before and that book hadn’t done well he would have to pass on it. ??? I never wrote any books before! So, I resubmitted the manuscript, convincing him of the misunderstanding and he took another look at it. The rest is history.

My luck was the niche I had carved out for myself which I have also done in my repair business. My success has been based on a few basic tenets: do good work efficiently at a fair price and always return phone calls!  I’m busy and see no end in sight, that is unless my actual eyesight eventually fails me. Wait! A new book idea! The Blind Luthier, subtitled What I Don’t See Won’t Hurt Me.

My book debuted in August, 2016, and I’m hopeful they will continue to reprint it. I’m currently writing “The Electric Guitar Repair Detective” and I’m crossing my fingers when I send it in to Hal Leonard that he doesn’t say: “Didn’t we do a book with you and it didn’t do well? I’ll pass on this one.”

My book is available through the Martin Guitar Museum Shop, Elderly Instruments, Sam Ash, and various on-line sites, including Amazon and  Walmart. “Watercolors” is at CD Baby under the name: “The Acoustic Suburbanites.” 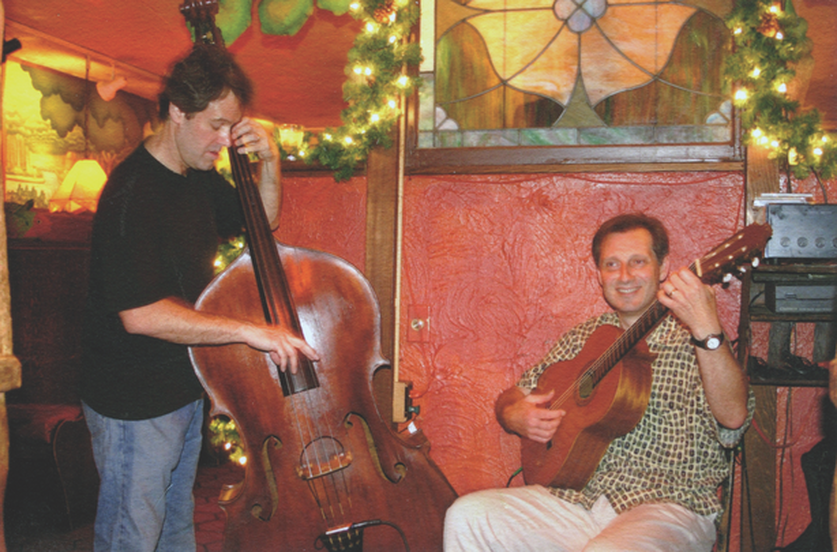 Dean Roumanis (In Memoriam) and Paul Neri, “The Acoustic Suburbanites”
​You can also get the cd or book by contacting me at: paulneri@sbcglobal.net
Ragweed, performing in Hamden CT at The Outer Space: watch it on Youtube!
https://www.youtube.com/watch?v=DL4XyivWdCQ
​
©  Jeff Resnick  2018
All Rights Reserved
CLICK HERE for more stories like this