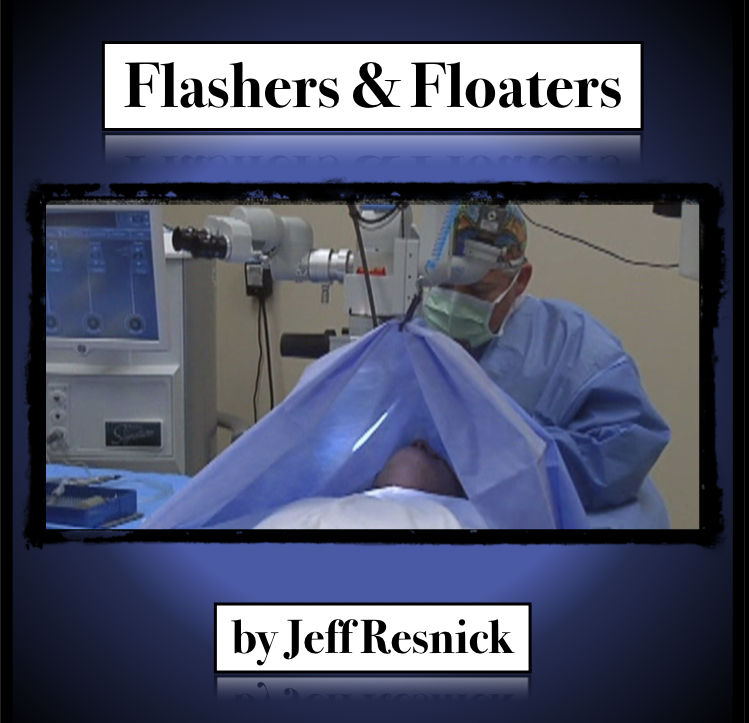 It began with the realization that I couldn't drive at night. Headlights approaching from the opposite direction blinded me, bright flashes of light invading my disappearing peripheral vision. When it became apparent that I might be a danger not only to myself, but to others, I visited the eye doctor.

"You have cataracts," he said simply. "Your left eye has reached the point where if you don't have the cataract removed, your 'Flashers' will only get worse."

'Wonderful,' I thought to myself. My left eye is the one that sees. My right eye is the one I haven't used since childhood eye surgery, due to a medical condition called 'Amblyopia.' In the vernacular, we know it as ‘Lazy Eye.’ Unless my left eye could be repaired, the right eye would be difficult if not impossible to retrain after 60 years. A visit to the eye surgeon left me optimistic that this was an easy fix. That my vision could improve to the point where my eyeglasses might become unnecessary. Really? Can that be possible? He assured me that only 10% of patients might require laser elimination of surgical scar tissue after the third month. That's when I hesitated. You see, I'm 'The 10% Guy.' Always have been. Always will be. Regardless, I had the left cataract removed, opting to wait until the right eye might require the same surgery in the future, despite the doctor's protestations. I was quickly learning that doctors are no different than retail store owners. Medicine has become Big Business, and aggressive salesmanship is unavoidable in today’s marketplace.

The cataract surgery itself was hallucinogenic! Lying atop the surgeon’s table on my back under ‘dream sleep,’ my left eye propped open, I realized I wasn’t dreaming at all. I was convinced I could see the damaged lens being removed from my eye, then fitted with a new, plastic one. I was just as sure I heard the surgeon humming a tune as he leaned in so close to my face. (He was wearing Old Spice…unfortunately.) Then again, maybe he was listening to music on his iPhone while he worked. (I hope it was one of my LPs!) How strange it was that I could see my own blood vessels inside my eye, reflecting from a mirror hidden in my skull. Which is exactly what it was! As you might know, the human eye is indeed a marvelous camera lens.

A week after the surgery, I was disappointed that my vision was still fuzzy, only to be reassured that clarity would return within the next week. Which it did. Sure enough, by the third month I was able to discard my coke-bottle glasses entirely! Even  while driving. Frankly, I was in seventh heaven. I couldn’t believe my good luck. I actually threw my glasses away! Well, you know what happened next. Yes, the infamous 10% warning bared its ugly fangs.

One Saturday afternoon, I suddenly felt faint, dizzy, and nauseous. I closed my eyes, searching for equilibrium. Opening them again, all I saw were black spider webs drifting across my field of vision. I was sure I was having a stroke. 15-minutes later, I was in the hospital emergency room, Cass at my side.

"Well, I'm not an eye specialist," the ER doctor said, "but it looks to me like you've had a retinal separation. Without immediate surgery, you could lose sight in that eye."

A retinal specialist confirmed I hadn't suffered a retinal separation, thankfully. Rather, the fluid sack inside my eye had separated, not the retina, a condition known as viscous separation. The spider webs were called 'Floaters.' Out-patient Laser surgery quickly repaired the damage. I learned that the interior fluid sack surrounding your eye is actually a vacuum, so the ‘Floaters’  would never disappear. Your brain learns to ignore them over time. If only my brain was that smart! My ‘Floaters’ were actually tiny droplets of blood within the fluid and would never dissipate. While they’re less predominant now after ten years, they're still ever present. Hey, it could be worse, right? Well, it is worse. My peripheral vision has progressed to tunnel vision. But at least I can still see! You can be sure I'm in no hurry to correct the growing cataract in my right eye. Why bother? I can't see out of that eye anyway!

​The lesson of this story? As we age, our body fluids literally dry up. Not only in our eyes, either! You can't fight it. You just have to go with the 'flow,' so to speak. Diminished as it may be. Most important, while we’re encouraged to trust our doctors’ medical skills, we’re increasingly left with the uncomfortable realization that our doctors’ marketing and sales skills must be considered in your decision-making process. What a world.
​©  Jeff Resnick  2018
All Rights Reserved
CLICK HERE to read more stories like this one​