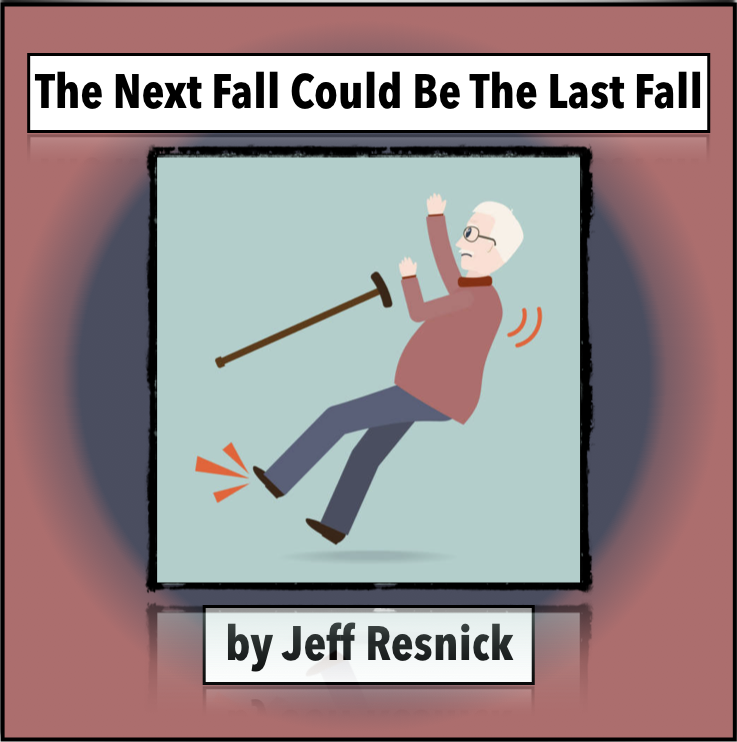 In the 'fourth quarter of life,' a fall can dramatically change things. When you're younger, you heal quickly. When you're much older, you heal very slowly, if at all. When we reached our sixties, several times on our walks Cass either tripped, or didn't notice a curb. In each case, she reacted immediately and went into the famous "relax-and-roll" move that she had learned in her gymnastics days. I have no doubt that Cass's athleticism has prevented serious injury each time.

Recently, we were riding our bikes through the park on our usual route. Somehow, a momentary loss of concentration caused her to run into a wooden parking lot post. At the last instant, she saw it coming and propelled her body forward before she hit the ground. Had she not done that, I have no doubt she would have broken a leg, or worse. When she landed, she landed on top of her bike. Convinced she was okay, we continued riding and then walked a few miles, before riding back home. It was only then that her leg began throbbing with pain. A huge hematoma formed on her black-and-blue shin. Thankfully, a visit to the doctor revealed no blood clot. At a younger age, no big deal. But at an older age, it took two months before the swelling and pain finally disappeared.

I'm reminded of my 85-year-old uncle in Florida. While walking with my aunt as they browsed storefronts in a shopping district, a car slowed and stopped next to them, two men seemingly lost and asking for directions. Always ready to help, my aunt approached their car, attempting to help them find their way. Suddenly, the man in the passenger seat reached out and grabbed my aunt’s purse. The driver immediately started driving away. The problem is, my aunt’s hands were tangled in the purse’s straps, and she was unable to let go as she was being dragged, the two men laughing the whole way. My uncle quickly came to the rescue, running to keep up with the car and frantically trying to release the purse from her hands. He succeeded, but fell on the sidewalk, saving his wife from serious injury, but breaking his hip in the fall. A few months later, he was gone. And my father's fall at age 87 in his Florida condo, breaking his leg. Despite being confined to a wheelchair, it seems that he thought it was no big deal to climb a few short steps on a ladder in the closet, attempting to retrieve something off the top shelf. That fall proved to be the beginning of the end.

Our bones are simply not able to endure such damage in the time of life we call 'sudden death overtime.' All any of us can do is be more aware of our surroundings. Take fewer chances. Better yet, take no chances. Be more careful. And don't lose sight of the physical realities of aging. Because, unfortunately, the next fall could be the last fall. Ouch!
​​©  Jeff Resnick  2018
All Rights Reserved
CLICK HERE for more stories like this one