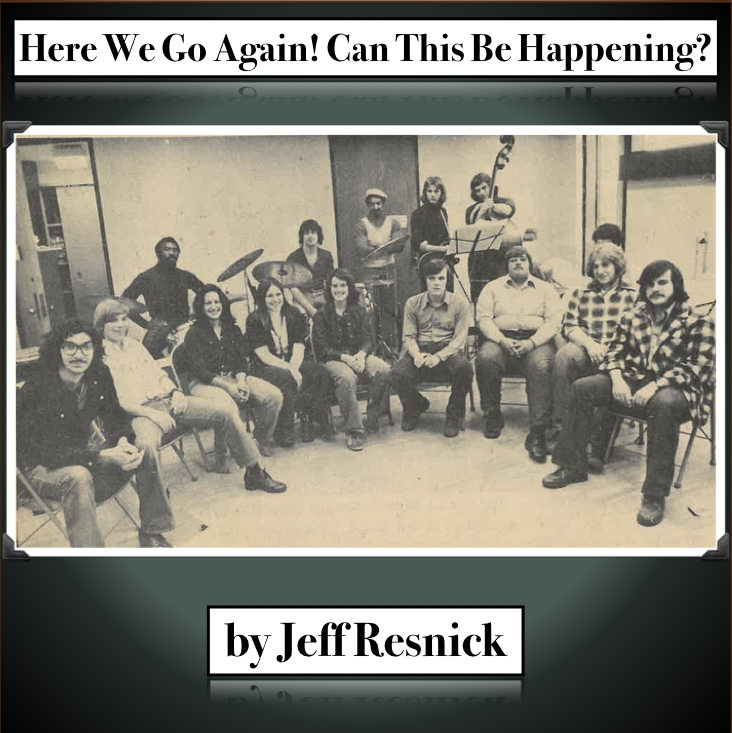 This is Part Two of a continuing Story!
​
CLICK HERE to read Part One
I put the word out that I was starting a college Jazz ensemble. The first to audition was Bob, a talented electric guitarist with a wonderful attitude. Then Kevin, promising he  wasn’t very good, so I wasn’t expecting anything special. Until he started playing his 12-string guitar! Rock, Blue Grass, Folk, Jazz, you name it. His chops were amazing. It was all I could do not to pull out a lifetime performance contract for his immediate signature!

“Kevin, that was great playing,” I boasted on his behalf.

“No buts, Kevin! You’ll be a stabilizing force in this band.”

In walked Julian, an alumnus of the local high school. His audition choice? ‘Soliloquy for Trumpet.’ The very piece I had played for my high school audition years earlier! No question, Julian would hold down the lead trumpet chair! (Tragically, he left us all too soon.)

Kevin recommended a piano player who was an Art student at the college. “I don’t know if he’d be interested, but he can really play.”

Bill showed up the next day, claiming he enjoyed piano simply for the relaxation it provided him. He was, and is to this day, a gentle soul with a kind heart.

“Gee, I really don’t have anything prepared,” he mused quietly.

“How about if you just sit at the piano and doodle,” I suggested.

‘Here we go again,’ I thought to myself as I sat listening. Visions of Connecticut flooded my mind. Can lightning strike twice after all?
“Bill, I’d love for you to play in the band,” I said between doodles. “You play beautifully. Just what we need.”

We had to find a bassist! Kevin unselfishly switched from guitar to electric bass for the good of the band. I promised him we would feature him on guitar, as well, once we found another bassist. In return, he asked if I might consider auditioning a singer for the band.

Hours later, a lovely young lass from the hills near Letchworth State Park took control of the room the moment she entered.

“Sure, it doesn’t matter to me,” she flustered as if bothered by the question.

I accompanied her on piano with a bluesy version of this Gershwin standard, wondering what to expect. Within moments, I had my answer!

“No doubt about it, Betsy!”

​Enter Jim, a local rock band drummer. Right away, I knew he could provide the rock-solid foundation the band needed to rise above mediocrity. Eager to get this group performing as soon as possible, I scheduled its first concert for late October, allowing only a month to finish writing the music and rehearsing the band. 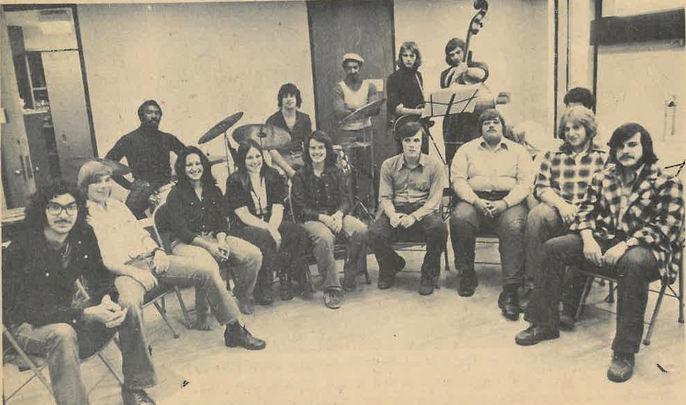 The college didn’t yet have a concert hall, but it did have unfinished space on the top floor awaiting a theater department. We bribed a group of woodworking students to construct a set depicting an intimate New York Jazz club, complete with curtained partitions, spotlights, and candle-lit tables. The buzz started to spread. Yep, you guessed it . . . another unavoidable Lesson in Life! During a faculty meeting, my department chairman threw me for a loop.

“Jeff, you’ll have to reschedule your concert, since it conflicts with our next meeting,” he said, oh, so casually.

“Whoa! You can’t just pull the rug out from under them, Frank. Wouldn’t it be easier to reschedule the faculty meeting?”

“No, it wouldn’t be!” he blew back, attempting to reclaim the advantage.

“I’d like a vote, here!” I demanded, looking at my colleagues. “Raise your hand if you’d be willing to reschedule our next meeting.”

Slowly but surely, all hands were raised, colleagues smiling at the prospect of departmental revolt. End of meeting. The next day, Frank ushered me into his office.

“You came on kind of strong yesterday, don’t you think?” he barked.

“What you meant and what you did are two different things,” he scolded.

“I won’t apologize for doing what had to be done for the sake of my students and my music program.”

A long pause ensued as he considered my argument.

“Okay, I can accept that. But next time, let’s keep it more civil. Your concert can proceed as planned. I just hope it’s worth it.”

​Over the next six years, Frank stood behind me in the face of administrative pressures unseen to the rest of us, and the department flourished because of it.
©  Jeff Resnick  2018
​All Rights Reserved
CLICK HERE to read Part Three