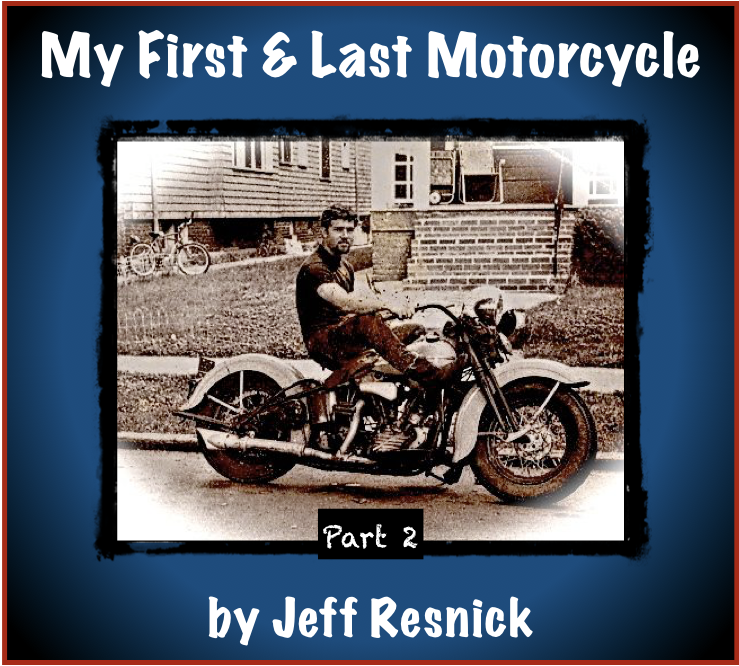 This is Part Two of a six part story
CLICK HERE to read Part One
The next day, Phil called on the phone to tell me I would need a motorcycle license before I could register and drive the Hog.

“Okay, how do I get a license?” I asked him, not yet worried about the answer to come.

“No biggie. You just take a driver’s test, like you do with a car,” he explained.

“You mean a written test?”

“No, dork! You have to drive it with the state examiner following behind you in a car to make sure you know what you’re doing.”

“No worry, dude. Under control. You see, there’s a little loophole in the state regs for motorcycles. You can take your road test on any cycle, not necessarily the one you’re gonna be ridin’. Makes no sense whatsoever, but the state just wants your money. They don’t care if you die in the process. I took my test on a Honda 50. That’s 50 cc’s. A tinker toy. One handle-bar twist to go. One foot pedal to stop. Even a dork like you can drive it and pass your test first time out. Trust me, dude. It’s a no-brainer.”

Five minutes later, Stu is on the phone. “No problem, man. My girlfriend has a Honda 50 she just bought. Brand new. She said you could borrow it the day of your road test, as long as you promise not to destroy it.”

“I don’t know, Stu, maybe I should practice for an hour or two to get the hang of it?”

“Naw, you won’t need any practice. Just turn one handlebar to go, and the foot pedal to stop. If she can manage it, even you can.”

I showed up the next morning at the designated state testing route. Naturally, it was raining cats and dogs. And hogs, too. Stu showed up late, mere seconds before the examiner was about to cancel my test, which would have meant waiting another three months for the next slot. Stu got off the Honda 50 and I got on, already shivering from the cold, not to mention the nervousness. The examiner looked at me, then the Honda, and shook his head in disgust. He told me the route to take through downtown, no expressway driving required. As he got into his car behind me, Stu showed me the twist handle for go, and the foot pedal for stop. How hard could this be, right?

Have you ever ridden a Honda 50? Well, let’s just say it really is more a toy than a motor bike. You sit on a seat, feet flat on the narrow floor in front of you. One gear. Top speed, 35 miles-an-hour, which is why there was no expressway driving for the test. The examiner beeped his horn once to get me going. And off I went, drifting crazily, first to the left, then to the right, before I got the hang of it. Left turn ahead, left hand out to signal left. Right turn ahead, right hand out to signal  right. I looked into the little side-view mirror and saw the examiner in his car behind me, still  shaking his head. But I made managed to make it back to the starting point, soaked to the bone. He pulled up behind me, spent a minute writing on his pad. Getting out of his car, he handed me a receipt. I had passed the test.

As he got into his car to leave, he frowned, and asked, “Okay, what are you really gonna ride now that you’ve got a license?”

“I figured. Stupid law. Just be careful, son. One mistake on that Harley and you’ll be sorry you ever passed this test.”

I passed the test. Got my license. Got my plates. I never forgot that warning. I’m still here, aren’t I? Well, barely. A week later, Phil showed up riding my Harley, Stu following by car. Two knocks on my door told me who was there before I even opened it and offered morning coffee.

“Okay, dude. Time for your driving lesson,” Phil said with a wink.

The two of them led me down the stairs to the gravel parking area behind my apartment, all smiles and back slaps the whole way. And there, in all its former glory, sat my 1946 knucklehead Harley police bike. 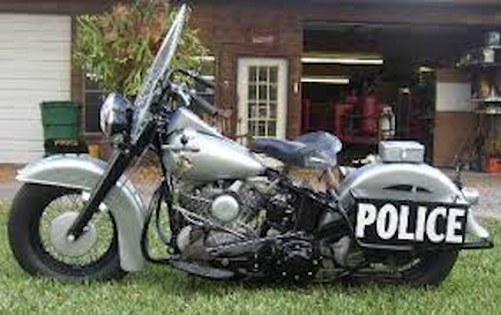 1500 cc’s strong. To my amazement, it looked almost new. To the contrary, it was 20 years old. But it sure looked great. A silver-gray monster. As promised, a shade over 20,000 miles on the odometer. Siren and blue lights still attached, though no longer operational. Single cop seat. Double roll bars, front and back, given its 600-pound weight. If you rolled this baby, she would surely crush your legs, something I almost learned the hard way. Suicide shift on the tank. I walked around it several times, awed by its massive bulk. Mike the Road Hog had put on a new rear tire, and new battery under the seat, another secret I would learn the hard way later. As far as I could tell, everything was in perfect working order. Then again, what did I know?

“Man, Phil, this is a beautiful machine!” I gushed. “Where do we start?”

“Grab it by the handlebars and roll it onto the side street here, dude.”

It took all my strength to move it and keep it balanced in my grip. Once on the street, Phil told me to sit astride the single seat and get myself balanced with both feet flat on the ground. Expecting my first of many lessons, Phil looked at me and smiled.

Before I could answer, I mean scream, he kicked the starter pedal as I sat in bewilderment, bringing the engine to a roar, slammed the suicide shift into first gear, engaged the clutch, and pushed me off while twisting the right handlebar’s throttle.

“Clutch, left foot! Brake, right foot!” he screamed. “Have fun, dude!” I heard through the quickly growing distance between us. I was on my way, ready or not. Shock? Here I was, gathering speed on the street without ever having ridden a real motorcycle. I guess Phil was a proponent of Learn by Doing. As for me, I didn’t dare turn in the seat to look back for the source of the laughter and whistles I heard. In my mind, it was learn or die trying. Oh, no! Stop sign, coming up fast! My mind was spinning, trying to figure out how to stop, shift, and stay alive. Instinct took over, I guess. It’s no different than driving a car, I told myself. Except the clutch goes up to disengage, and down to engage. I made it to a stop the hard way. Slammed the shift into neutral. Dragged my feet on the pavement, forgetting about the brake. Caught my balance again. Looked left. Looked right. Nothing coming. No one watching. Or laughing. Stalled out trying to accelerate from a stop in first gear. Swore. Swore some more. Walked it to the curb. Engaged the kick stand.  Up-to disengage the clutch. Put it in Neutral. Stomped on the start pedal without getting thrown over the handlebars, another lesson to be learned later. Heard the roar. Felt the power. Kicked the kick stand up. Hence the name kick-stand. Shifted into first gear. Down-to-engage the clutch. Accelerated. No stall this time. Clutched. Shifted to second. Clutched. Third. Getting the rhythm of it. Within an hour, I had it down. Exhilarated. Laughing out loud.  Yes, way before anyone had yet heard of “lol.” Didn’t stop for lunch. Didn’t stop for dinner. Just rode and rode and rode some more. Got back to my apartment around midnight. Exhausted. Bugs in my teeth. Sand flies in my jeans. Parked my baby in the back gravel lot between two buildings to keep it hidden. Oh, did I forget to tell you what Phil remembered to tell me days later? This monster had no ignition key! Well, it used to have a key. But no one at the police garage knew where or when it disappeared. A lot of help that was now. I could only hope no one ever tried to start it without the key. Because if they did, I would have been out my $175 Harley Hog.
©  Jeff Resnick  2018
All Rights Reserved
CLICK HERE to proceed to Loss: Part 3