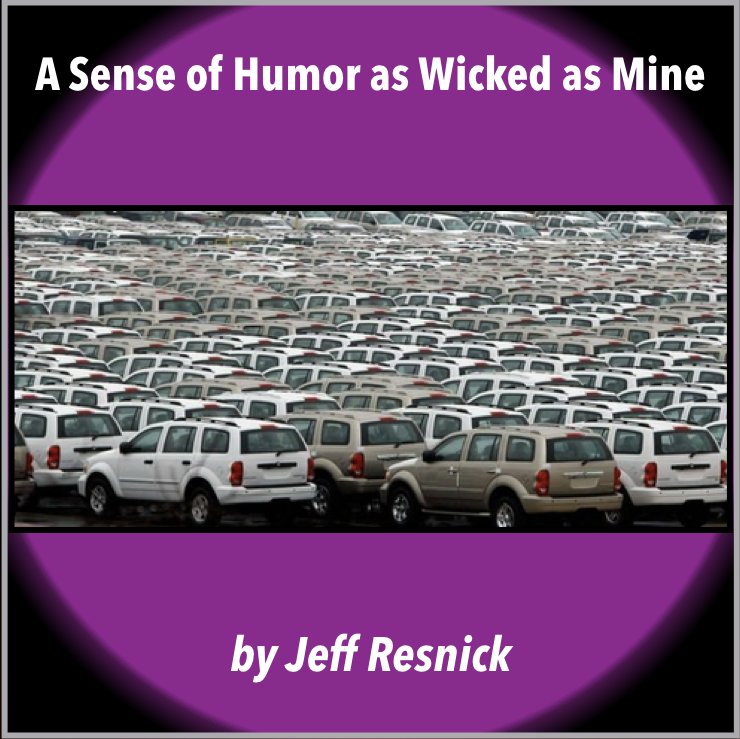 At 24 years of age, Jay found himself in the position of running a major car dealership. He started working at his father's dealership as a youngster, washing cars, changing oil, and learning every aspect of the car business from the ground up. Jay's father had successfully built his business into one of the first multi-point dealerships in the nation. At that time, if you were a car dealer, you were a single-point dealer, which means you sold Fords, or Chevrolets, or Dodges.  But never two competing brands, let alone fifteen!

Rumor had it that Jay was on the outs with the ad agency that had handled his dad's account for many years. Apparently, the personality of the agency no longer meshed with the personality of the dealership after Jay took over. Every ad agency for miles around was pitching this prestige account, one that could quickly elevate an agency into the very desirable position of being recognized as a leader by other large clients in the area. Or, if you fumbled the ball, you weren't likely to get another shot at stardom.

Casual as could be, I walked through the front door of the dealership and approached the elevated sales podium, which was by now standard in most car dealerships. It was essential that the sales manager maintain the negotiating advantage of looking down at you from on high! Big Vince greeted me with a grunt.

Vince scowled down over the podium with a look of disdain. "Waddaya wanna see 'im for?  He's verrrry busy."

There I stood, bushy full-face beard, curly mop of hair down to my shoulders, wearing jeans and sneakers. But at least I had my tweed sport coat on! I lifted up my boom-box and pointed to the cassette tape that was loaded and ready to play.

"This is your next ad campaign!” I boasted.

"Is that so?" Vince bellowed. "I'll tellya whad," he challenged. "Play it for me first, and if I like it maybe I'll play it for the owner."

I pressed the Play button, and turned the volume up full blast. For that first moment, Vince actually allowed his nervousness at the volume level to show, even though he was the one on the podium! After all, there were customers in the showroom. Within 30-seconds, no less than a dozen people formed a tight semi-circle around us at the podium. When my commercials finished playing, everyone not only applauded, but they asked to hear the tape again.

Minutes later, Jay came out of his office and invited me in for a cup of coffee.

"Who did these?" he demanded.

"This is good stuff…really good!”

That day, I was appointed Ad Agency of Record. The first major promotional event I created for Jay was The World's Greatest Car Sale. (By 1988, this event had been licensed to 300 car dealerships across the country, featured at the NADA national convention in San Francisco, and was voted The Most Outstanding Retail Promotion in America.) Naturally, we soon developed many such successful events, all variations on the original World's Greatest theme. A pattern developed. We launched a new event on the radio on Thursday, leading into strong weekend sales. I visited the dealership every Tuesday, cassette tape in hand, to play the upcoming weekend's radio commercial I had just completed, for Jay's approval. It became Jay's habit to invite Big Vince and all available salesmen to take a seat in a large van on the showroom floor, into which we would all squeeze, for the purpose of listening to the tape. As you might expect, Big Vince always took up the seat furthest to the rear…all of it. I played the commercial repeatedly, giving everyone their chance to say yay or nay. I never heard a nay.

I always enjoyed working with car dealers because their sense of humor was usually as wicked as mine! I put that wickedness to the ultimate test on one occasion, and I'll never forget it. On one such Tuesday, the day of our eagerly awaited in-the-van listening session at Jay's dealership, I had to fly to a distant city to deliver an advertising seminar. I called Jay to explain why I wouldn't be able to make our meeting that day, but promised him I would make it the next day, Wednesday. Jay expressed concern over not being able to approve the radio commercial until Thursday, the day before it was scheduled to air.

That's when the idea hit me. I told Jay if he didn't like it I would stay up all night Wednesday, if necessary, to produce one he liked. Actually, I did stay up all night. But not Wednesday! When I returned from my seminar at midnight Tuesday, I drove straight from the airport to my 8x8 recording studio where I devoted three hours to producing the most obscene radio commercial you could imagine. I must admit it got pretty raunchy. So much so that I'm too embarrassed to share the script with you!

Late Wednesday afternoon, I arrived at the dealership prepared for our much-anticipated listening session. As usual, the van filled to overflow, Big Vince holding down the rear, so to speak. With as straight a face as I could manage, I explained to Jay that I had already anticipated his approval of the commercial he was about to hear, and had sent the master tape to the radio stations for broadcast the next morning. As much as Jay trusted my judgment, I couldn't help but notice the slight rise of his left eyebrow. I placed the cassette tape in the van's tape player and pressed the Play button, sliding the volume up to full as required. During the first ten seconds, everyone settled back into their seats comfortably, anticipating what had become the standard opening to our commercials. And then the fun started.  There was stunned silence on the part of the vansters. Ever so slowly, word after word, raucous laughter took over. By the end of the commercial, Big Vince had the van rocking precariously from left to right, front to back.  Looking out the van windows, we could see customers staring in astonishment, wondering what kind of drunken brawl could possibly be taking place inside the van.

"Play it again, Jeff!" was repeated no less than a dozen times.

When we were finally all laughed out, our departure from the van must have resembled a scene from the circus, a seemingly endless processional of red-faced clowns filing out from the one open van door. Everyone stood and stared, jaws dropped in amazement. And then, just when you were absolutely convinced not one more body could possibly have been squeezed into that van, out tumbled Big Vince, hiking up his drawers!

Jay pulled me aside. "You didn't really send that tape to the stations, did you, Jeff?"

I got another raised eyebrow, this one the right, and Jay made sure I didn't leave without giving him the cassette tape.

"You're kidding!” I protested.

"Just give me the tape, Jeff!"

So, I did. As had become my habit, I showed up at the dealership late Saturday afternoon to see how the promotion was going. Oh, the place was rockin', as they say. And you'll never guess what was playing through the loudspeakers at maximum volume, not only in the dealership, but outside on all the sales lots. Yep, you guessed it. The joke was now on me.  Looking back, I realize now that new clients were actually attracted to my agency by the masochistic anticipation of being victimized at the most inopportune moment by my legendary  wicked sense of humor. Wait a minute, don't look at me like that! Those car dealers were really a bad influence!  Really! I must admit, though, I really do miss those days.
©  Jeff Resnick  2018
All Rights Reserved
CLICK HERE to read the end of this story