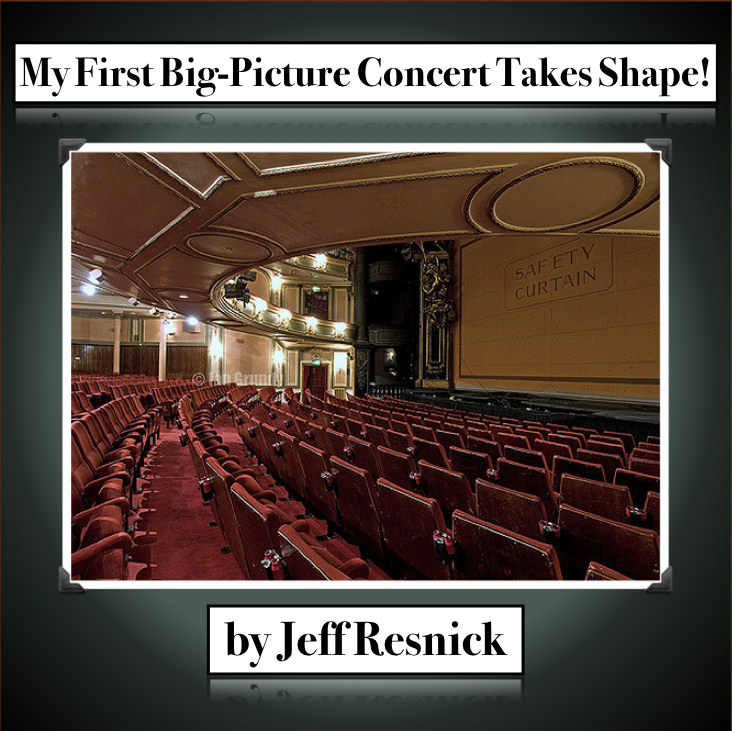 This is Part Six of a Continuing Story!

​CLICK HERE to read Part Five
I sure enjoyed my regular sit-in sets during Bart and Kevin’s two-nights-a-week shows at the Falcon Crest Inn! For me, it provided the needed practice, valuable experience, and improving chops on the Recorder that would pay big dividends down the road as I began conceptualizing a Big Picture performance for the Jazz Ensemble at our upcoming Spring Concert, to be held in the high school auditorium where I had first heard David Amram perform. I was determined to work the Recorder into our concert as an important solo instrument, and began the grueling process of composing and arranging all the music for the show. Per my goal, the first half of the concert ended up being an integrated 30-minute composition, constructed much like the movements of a symphony, yet fully connected without interruption. For the second half, I reverted to the more traditional format of individual arrangements of original songs in Jazz, Rock, and Pop styles, preceded by a half-hour set by Bart and Kevin.

Back at school, I must tell you about the final student to visit my office and ask to play in the band. In walked Leonard, a kooky kind of skinny little guy with thinning black hair, checked shirt, bow tie, striped pants, and a thick Italian accent. He was a real character, but a very likable one after the initial shock of meeting him wore off.

“So, What do you play, Lenny?” I asked, regretting my question before he even had a chance to answer it.

“Nuttin’. Naw, I don’t play an instrument, but I do have fun wit da synthesizer. Ever heard of dat before, Professor R?”

Lenny consumed the next half hour explaining the technicalities and techniques of the  synthesizer, the newest electronic phenomenon to invade the music world. Frankly, I was lost in the explanation, and told him so.

“Oh, dat’s okay, Professor R. I can just go get it from my car and play sumpin’ for you. Wait here, I be right back!”

​A few minutes later, Lenny stumbled into my office with his mechanical black-box, eager to show me how it worked. He created the most unusual cacophony imaginable by plugging wires into all these little jacks on the front panel. My first thought was that Lenny was indeed a most unusual character. But then I thought to myself, ‘Hey, if I can find a place for Mike the violinist, I can certainly make a space for Lenny the synthesist!’ And that’s exactly what I did. I couldn’t have known it then, but our Spring Concert performance would make Lenny a living legend in the local community.