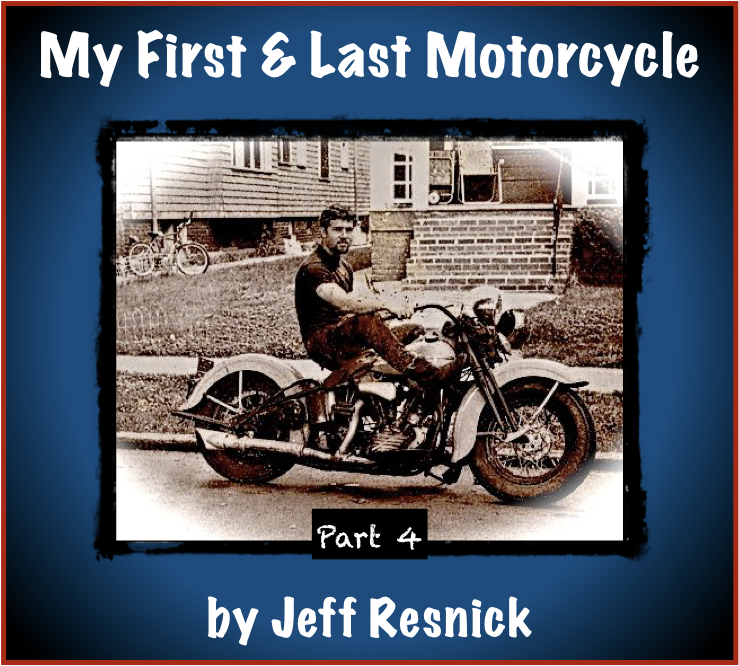 Before I continue my story, allow me to warn you in advance that you’re not going to believe what I’m about to tell you. But I promise. It’s all true. Exactly as it happened. No embellishment required here.

The applause died down as the speaker was invited to the podium. He took the microphone and introduced himself.

“I’m the leader of the The Road Hogs. And I’m here to tell you about Buffalo cops, and the constant harassment we’re forced to put up with.”

He continued for about ten minutes before getting to the real purpose of his speech.

“I’m here today to raise money for all the Buffalo children’s charities we support with our work. So I’m gonna pass this helmet around. Give what you can for the good work we do for the young people of our great town.”

The helmet was passed, starting at the front of the large hall. Cass and I were in the middle of the hall. The helmet finally arrived. In my hands. Yes, my helmet. Full of cash. Lots of it. My knees wobbled. Do I dare do what I was thinking of doing? Take the helmet and run? I looked at Cass. She must have sensed my thoughts, because she shook her head as if to say ‘don’t you dare,’ visions of a riot over my body on the floor, helmet spewing cash all around. I passed the helmet to her. She passed it to the next person. And on it went, until the Road Hog body guards in the back of the hall emptied the cash into their sack and departed. Their leader concluded his speech.

“Thanks, guys. We appreciate your generosity. You’ve done a good thing here today.”

He sauntered out the door to join his comrades and they all high-tailed it out of town. Cass and I said a prayer for my stolen helmet. But wait! There’s more! If you thought that was the end of the story, you really won’t believe what happened next. Three days later, Cass and I were watching the 11 o’clock news on WKBW-TV. Buffalo’s most trusted and respected news anchor delivered the lead story of the evening, complete with film footage.

“Tonight, the leader of the Road Hogs motorcycle gang was shot to death in downtown Buffalo. We’ll have more on this breaking story as soon as details become available.”


Once classes were officially over for the semester, I looked forward to my burgeoning career as a performing musician. I had gigs lined up in Buffalo, Rochester, and everywhere in between. Including a regular three night-a-week gig at a well known Lebanese restaurant in nearby Brockport. By this point, I had molded my new persona by trimming my ‘stache and hair. And smoking a pipe during my nightly breaks between sets, thereby adding a hint of sophistication to my Jazz playing. Not to mention my black tuxedo, black tie, black patent leather shoes, flowery blue shirt, suspenders, and maroon cummerbund. Then this great idea hit me. How better to differentiate me from other local musicians? Yeah, you guessed it. I bought a trumpet gig-bag, an over-the-shoulder leather carry case. Very slick. Nightly check list: Tuxedo, on. Bow tie, on. Flowery blue shirt, on. Maroon cummerbund, on. Suspenders, on. Black patent leather shoes, on. From that day forward, I rode the Hog to all my gigs. You can well imagine the looks I got from anyone else on the road, be they in cars, trucks, or on cycles. In fact, I developed a rather interesting following of fans who kept track of my gigs long before the days of tweeting or texting. Every between-the-set break found me smoking my pipe in the parking lot, discussing the Hog with anyone interested enough to listen. This practice continued into Fall, even when the weather cooled off, until the Winter snow finally curtailed my modus operandi.

One day in early October, I was riding the Hog to a gig, caught in a sudden rainstorm. Nothing is worse that riding a cycle in the rain without rain gear. Especially when you’re wearing a tuxedo. Approaching a traffic signal on Main Street in Williamsville, the light suddenly turned yellow. I made a quick choice. Slam on my brakes and spin out on the wet road. Or, continue through the yellow. I chose the latter. Just my luck, there was a police car sitting right there. He hit the flashing blue lights and siren, directing me to pull over to the side of Main Street through his amplified microphone. I pulled over. Waited in the rain. After a few minutes, he got out of his car and walked over to me.

“Do you know why I pulled you over?” he asked.

“Yes, sir. I went through a yellow light.”

“And why did you run the yellow?” he demanded.

“Officer, I was afraid to hit the brake and spin out on wet pavement. So I ran the yellow instead.”

Nodding his head, he looked at me closer, seeming to notice my tuxedo for the first time.

“What’s that satchel over your shoulder?”

“With your permission, sir?” I asked, gesturing at the bag.

He nodded, so I pulled my trumpet out for him to see. By now, as you might imagine, there was a small crowd of people on the sidewalk wondering what was happening. A few even began talking rather loudly, suggesting that the officer let me go without a ticket. He ignored them. But I swore I saw a lightbulb pop up over his head.

“You’re that Jazz musician, aren't you?”

“I read about you in the Buffalo Evening News. You’re a music student at UB, too, aren’t you?”

He scratched his chin before speaking again.

“Look, son. I have to give you a ticket once I stop you. But I’m going to give you a break. When you appear in court, tell the judge you saw an oil slick on the road in front of you. I think he’ll let you go with a warning.”

“Thank you, officer. I really appreciate your kindness.”

He handed me the ticket. Smiled. Shook my hand. And drove off. Several weeks later, I appeared in court. In my tuxedo. The judge looked at me, read the summons, and asked me one question.

“Why did you run a yellow light, young man?”

“Judge, as the light changed from green to yellow, I saw an oil slick on the road ahead of me. I was afraid stopping quickly would be more dangerous than the alternative,” I explained.

He looked straight at me. Eye to eye.

“Is the police officer who ticketed you in the courtroom?”

Before I could turn to look, the officer stood up, waved his hand, and said, “Yes, your honor. I’m here.”

The judge looked at the officer, who nodded his head in the affirmative.

I walked back to shake the officer’s hand and thank him. But he was already gone.