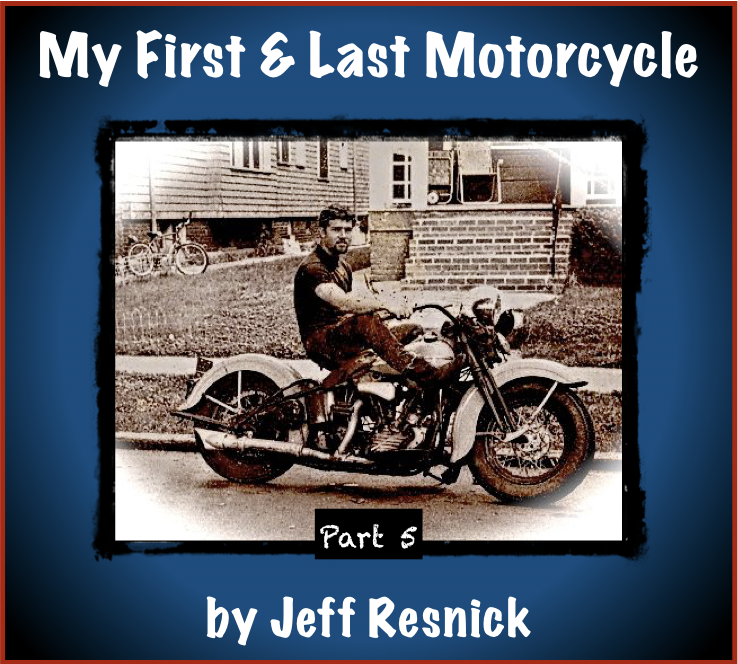 “Now stand over to the side, and don’t move, please.”

I did. He spent the next ten minutes doing a thorough check of the Hog. Tested the brakes. Clutch. Lights. Shocks. Suicide shift. Tires. Everything.

“Is this your motorcycle?”

“Show me your license, please.”

“And your registration, please.”

I did. He had this ominous look on his face before finally speaking again.

“This is a beautiful piece of machinery, my friend. Please drive it safely. I would hate to have to pick you up off the pavement someday. Will you do that for me?”

The sidewalk crowd that had formed applauded. I kick started the Hog, unable to stop smiling. As I drove off, I heard at least one voice shouting out, “It’s the motorcycle musician!”

Yep. That was me.

Not all policemen were as kind. In the middle of a winter blizzard, by necessity I was driving my Chevy Corvair convertible home after a New Year’s Eve gig at the restaurant in Brockport. If was 4:30 AM. I was tired. Freezing. Shaking. Eager to get home to bed in my warm apartment. A police car pulled me over once again. This can’t be happening, I thought to myself. I waited for the officer to walk from behind my car. He motioned me to roll down my window. Once again, hand-on-holster.

“Do you know why I pulled you over”?

“Your tail lights are out.”

Only that afternoon, I had taken the car into an audio store to install a new radio. Then it hit me. They had obviously forgotten to replace the fuse they disconnected to complete the installation. I explained this to the officer, adding, “I have my receipt right here, in my glove, if you’d like to see it. I promise, I’ll get it fixed today, sir.”


He looked at the receipt. Satisfied, he asked, “Today?”

“Okay, I’m gonna let you go with a warning. But I don’t want to see you again without working tail lights. Understood?”

Three for three, I thought to myself. Actually, he was probably colder than I was, standing outside in the blizzard, eager to get home. Once again, though, truth is stranger than fiction. A short 15 minutes later, another policeman pulled me over on the same road! We went through the same routine. He didn’t believe me.

“Sir, I was stopped no more than 15 minutes ago by another officer, on this same road. I promised him I would have repairs made today, and he let me go without a ticket. Honestly, sir.”

“I don’t believe you. But even if I did, I’ll bet he didn’t warn you about your muffler. Way too loud. Sounds like custom pipes, if you ask me. Illegal.”

He gave me a ticket, despite my protestation. In court weeks later, I explained the entire scenario to the judge.

“Do you expect me to believe that you were stopped twice on the same road within 15 minutes?”

“And the first officer let you go with a warning?”

“And the second officer ticketed you?”

“Did you tell that officer that the first officer let you go with a warning?”

“But he ticketed you anyway?”

“Are either of those officers present in court today?”

Everyone turned to look. Bad luck for me, neither officer was there. The judge eyed my ticket.

“I’ll return in a moment, Bailiff. Don’t allow this young man to leave the courtroom.”

A few minutes later, the judge returned to the bench.

“Young man, I’ve just spoken with the ticketing officer by telephone. He admitted that you did indeed tell him that another officer had first warned you to make repairs that day, and he let you go with a warning. Did you have repairs made that day, as promised?”

He studied my eyes closely.

Was I wrong not to mention to the judge that the second officer was the one who warned me about the loud muffler? Hmmm. I just can’t remember. Oh, well. Score one for the musician, I guess.

The Hog stayed hidden between apartment buildings for the winter, covered by a heavy tarp to protect it from the snow and cold as much as possible. Spring finally arrived after what seemed like years of waiting. Mike the Road Hog got my Hog road-ready, making the necessary adjustments. Oil change, brake and clutch adjustments, grease, tire checks, and whatever else you have to do to ride for another season. It was beginning to dawn on me that owning the Hog could turn into a full-time job for this novice. The handwriting was on the wall. If you own a bike like this, you better learn how to service it yourself. Or go broke. Problem is, I was already broke!

On the first warm day, blessed with a stunning blue sky and temperature in the 70’s, Phil and I decided to ride over the Peace Bridge into Canada. As soon as we crossed the border, off came the helmets. We were cruising along, having a bit of fun. I suppose I remained in first gear far too long, accelerating the whole time. POP! The Hog started spitting smoke and flames out of the carburetor. Really! I thought my leg was gonna catch fire. We pulled over. Both clueless. Shut her down. Let her cool down. Decided to head home. I kick started the Hog, and the  flames shot out six feet from the carburetor again. The noise of the engine was deafening. Power was minimal. We managed to hobble across the border, Hog in limp-mode. The Peace Bridge customs agent wasn’t too happy, having to scream above the constant roar of my engine. Disgusted, he waved us through with a scowl, not even bothering to ask if we had anything to declare on our return to the U.S.

The next day, I took Hog into a Harley dealership right down the street on Bailey Avenue.  Blown head gasket. Not good. Said he’d do his best. But there was really nothing he could do to return Hog to its former glory. A few hundred dollars later, it seemed to be running pretty smoothly. Just didn’t have any of the power that once defined its life. Regardless, I continued to ride, returning to the dealer often for more repairs just to keep Hog semi-healthy.

​One summer day, Cass and I decided to ride Hog over into Canada yet again. On the Robert Moses Parkway near Niagara Falls, something happened that’s all too common to motorcyclists. A car coming from the other direction had its left blinker on, intending to turn into a parking lot. The driver looked straight at me approaching head-on. And what did he do? Yep. Turned in front of me. Oblivious to two people on a 600-pound motorcycle unable to stop on his dime. Luckily, intuition took over where my mind was failing. Hog knew what I had to do. I careened onto the grassy shoulder and took Hog down on its side. The three of us barreled across the grass, digging into the ground yet sliding the whole way. I counted my blessings, recalling the necessity of those double roll bars. Hog protected Cass and me. Front and back.  Without those bars, neither of us would ever have walked again. Or worse. But we walked away.  With only a few scratches. And shot nerves. The most amazing thing? We righted Hog onto its wheels. Scraped all the dirt and grass off. Kick started it. And rode the monster back across the border to the safety of my apartment. Under the tarp. Between the buildings. Oh, and the driver of that car? Never stopped. Just kept going. Didn’t even look back. Takes all kinds, I guess.
​
​©  Jeff Resnick  2018
All Rights Reserved
CLICK HERE to proceed to Part 6