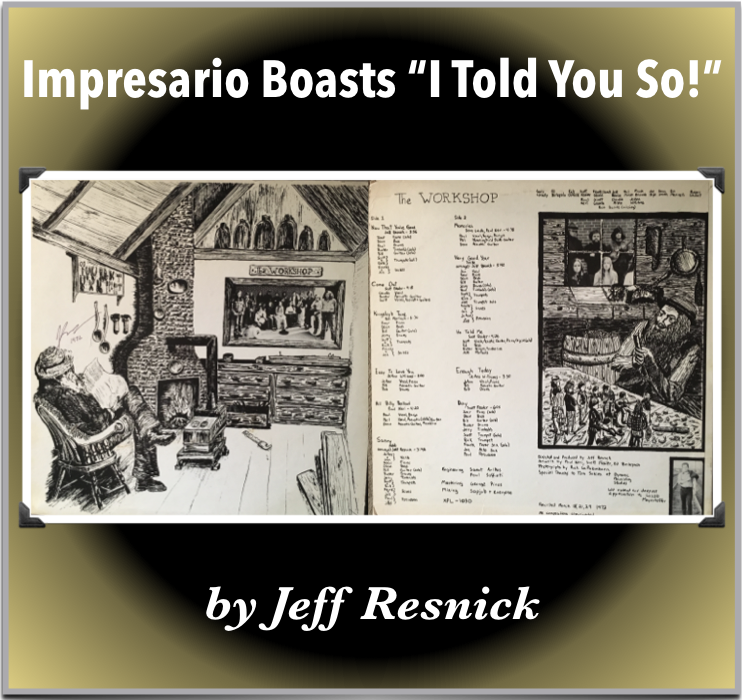 This is Part-7 of a continuing story.
​
CLICK HERE to read Part-1
CLICK HERE to read Part-2
CLICK HERE to read Part-3
​CLICK HERE to read Part-4
​CLICK HERE to read Part-5​​
CLICK HERE to read Part-6
The band decided on their own that they were ready to record an album. Several of them had already recorded their own music, and they lined up the session at a New Haven recording studio. You’re undoubtedly wondering where the money to fund this LP was coming from! From the school administration? Wrong! After the newspaper article about the plight of the Jazz Workshop and the untimely politically motivated resignation of The Magnet, a local businessman stepped up to fund the recording session, with the pressing of 1,000 copies of the resulting album, which he was certain would eventually sell a million copies, making the kids rock stars, and him a world famous impresario. That’s what I like: a confident, if unrealistic, entrepreneur. All proceeds from album sales would first be used to pay him back for his investment before any profits could be used to fund additional band projects. Profits? You must be kidding! There was no way the man should even expect to cover his costs! Recording time wasn’t cheap, and the LP pressing wasn’t either. But he was eager to proceed, so we all hit the studio for a rainy weekend marathon recording session, the impresario tagging along as the groupie with the coffee and doughnuts, not to mention the money. We managed to finish the recording that first weekend, returning the next weekend for a marathon mixing session.

The resulting album was truly something to hear. It went on sale three weeks before our  Spring Concert. Sold out. Fast. Investment paid back. Profit in the bank. Shocked Magnet shakes his head in disbelief. Impresario boasts, “I told you so!” The kids took a copy to a New Haven radio station. The Program Director liked it so much, he invited us to appear live-on-air for an interview about the album. We soon experienced the power of the media, as The Jazz Workshop became the talk of the town, with more concert performance invitations. We soon played at the heralded Quinnipiac Jazz Festival, where our young guitarist won the Best Performer award. Good times were enjoyed by all, and the band’s reputation continued to grow statewide. 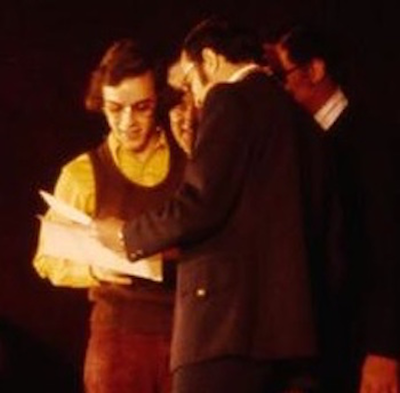 The highlight of the Jazz Festival was the featured performance by Woody Herman and his Thundering Herd. They kicked off the concert with a powerful arrangement of Chicago’s ‘Twenty-five-or-six-to-four’, and the hall virtually jumped two feet off the ground. You could see students’ jaws hit the floor in disbelief from the very first note, experiencing the raw power of an ensemble of professional players. The motivation provided by the likes of Woody Herman creates a true sense of ‘I Want To Do This’ in young music students. There’s no better way to foster their musical growth than introduce them to a concert-workshop setting with one of the finest ensembles in the world. Plus, there was a nice side benefit for The Magnet.

​Sonny Costanza, lead trombonist in the Tonight Show Band, was the force behind the festival, and director of the Quinnipiac College Jazz Ensemble. He invited me to compose an original chart for an upcoming concert featuring guitarist Kenny Burrell. All those countless hours of composing charts for the UB Jazz Ensemble were beginning to pay big dividends.

The resulting performance was something I’ll never forget. Given the opportunity to write for an internationally acclaimed artist was way beyond special. I could easily have considered myself finally a competent swimmer in that little pond with the big fish, but I was quickly brought back to reality by the amazing artistry of Kenny Burrell. He didn’t even rehearse with the band in advance of the performance, arriving late due to a flight delay, guitar in hand, mere minutes before show time. Kenny proved to be the consummate professional musician. He walked onto the stage to the wild applause of the audience. Sonny introduced me to the crowd as the composer of the first chart to be performed, entitled ‘Doria’. Sonny warmed up the crowd with a  story about the Jazz Workshop’s recent Jazz Festival experience. Knees knocking, I walked up the stairs onto the stage from the fifth row. Not one to waste good rock attire, I had pulled out that old frilly shirt from the Miss Erie County Pageant show! Did I mention the white pants? And the blue tinted aviator glasses? Of course, by now my bushy beard and curly mop-top hair reminded many of a werewolf, but what did I care? I had already resigned my day job, even though it wouldn’t take effect for a few more months. To my surprise, many in the audience were obviously familiar with my work at the high school, and they let me know it with hoots and howls. I’ll never forget Kenny’s expression as I approached him, hand outstretched for a shake. ‘And just what are you, dude?’ he seemed to ask without need of words. I do believe he was actually embarrassed to be seen on stage next to me, given his conservative dress code and professional appearance. Yet there we were on stage, meeting for the first time, as he scanned his part prior to me finger-snapping the tempo for the rhythm section. From there it was a race to the finish line. A standing ovation, no doubt for Kenny, left me breathless. As I turned to leave of the stage, Kenny first grabbed my hand and said, “Nice chart, man.” With that, I knew I was now a willing passenger on the professional chart-writing express train! In the years to follow, I arranged music for several internationally acclaimed Jazz artists. There’s more to the album story, but it’ll have to wait for the appropriate chapter.
©  Jeff Resnick  2018
All Rights Reserved
CLICK HERE to continue this story
CLICK HERE for more stories like this one