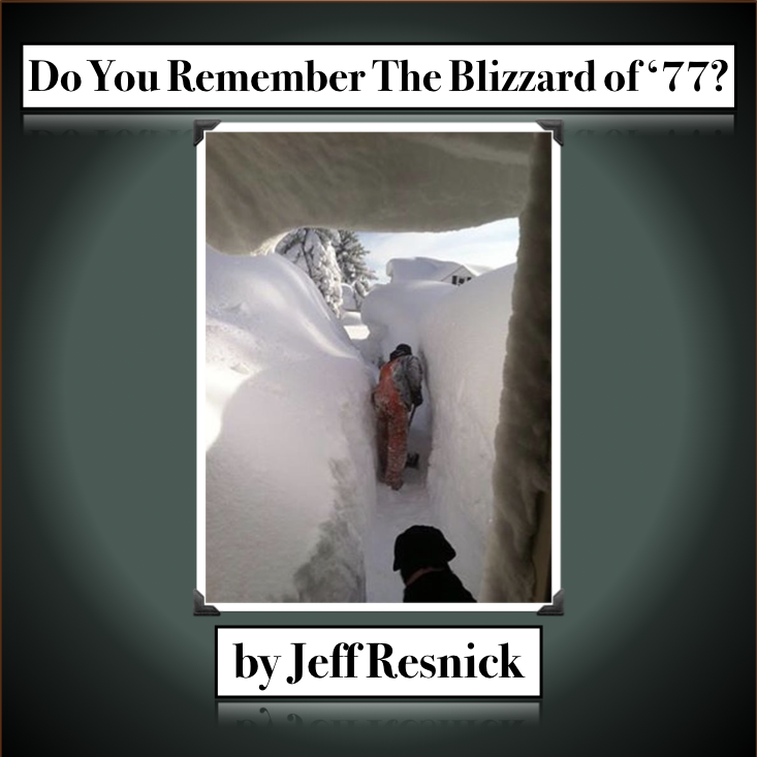 This is Part Thirteen of a Continuing Story!

​CLICK HERE to read Part Twelve
Jimmy Carter was President. The Ayotollah took hostages in Iran and abruptly turned off the oil spigots, leading to nationwide recession. Cass and I had just purchased a 1901-built fixer-upper house for the grand total of $19,900. Our mortgage interest rate was 17%! And you thought 4% was high? Gas rationing meant we could buy gas for our old Pontiac every other day. Sunday was a no-gas day for everyone, unless you had eaten beans the night before. (Sorry.) The kids’ grammar closed down for two months due to natural gas shortages. Just when you thought it couldn’t get any worse, the infamous Blizzard of ’77 hit Western New York.

I got a phone call at 11:30 from Cass. She’d heard that a freak storm was predicted to hit by early afternoon. Given the dire warnings, she told me to be waiting outside the college no later than noon, because she was picking me up come hell or high snow.
“We get these warnings every day, Cass, and nothing happens. Today’s band rehearsal day. Don’t worry, the storm will probably never materialize,” I admonished.

“Just be out front at noon!”

Enough said. Precisely at noon, she and the kids pulled up in our old Pontiac. Two miles from our house, the black heavens opened up with the wettest, fastest snow fall ever seen outside of Siberia. We considered pulling off the road to wait out the storm, but we had a premonition that we might never find our way home. We would learn days later that drivers had been found frozen to death in their cars, having pulled over and never escaped. We managed to pull blindly into our driveway at one o’clock, the exact time the storm was predicted to hit. It was darker than the darkest night with neither stars nor moon visible. The wind was howling, and the snow was already over a foot deep, drifting against the house. We just made it inside before the power went off. Little did we know then, but electric service wouldn’t be restored for two weeks. I decided to walk one short block to the corner store to buy some comfort food, since we hadn’t shopped in a few days. I put on my heavy goose-down parka, tied the hood over a woolen hat and earmuffs, and put on heavy gloves and boots. I made it 100-yards before I realized that if I didn’t turn right around and return home, I might not survive the hurricane force wind and bitter cold. That evening, the four of us slept together in sleeping bags on the carpeted living room floor. It was quite an exciting adventure for the kids, but Cass and I felt like the world was coming to an ignominious end.

​We awoke the next morning to the unabated roar of the wind. Looking out the frost coated front windows, all we saw was white. The power still out, so we turned on our battery-operated radio for news announcements. We were shocked to hear that a ban on travel had been ordered during the night by the State Police. No one was allowed to venture outside except for emergency travel, under penalty of on-the-spot arrest. Looking out the living room windows, we still couldn’t see anything but white. Running upstairs to look out the bedroom windows, we were amazed that snow had piled to the second floor. Snowmobiles rumbled up and down the street, the only mode of transportation possible, or legally allowed, and only for emergency medical transport. We holed up for a second night in our sleeping bags, unsure what tomorrow might bring. By now, the kids’ excitement had turned to apprehension, if not fear. 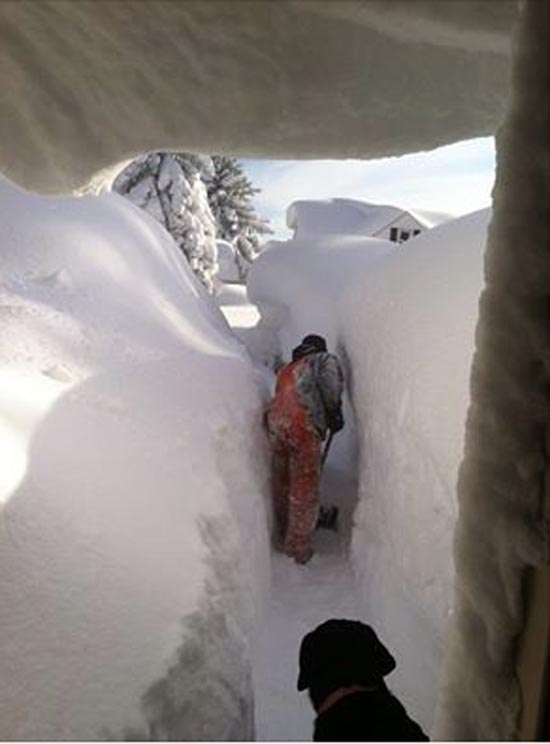 The next morning we woke to sunshine. But the temperature outside was a frigid 15-degrees below zero. The wind continued to howl with gusts of 60 mph, and the public was again instructed not to venture outside. Days later, as suddenly as the storm had hit, the wind died down, the temperature rose into the teens (a veritable heat wave), and we felt we had escaped the end of civilization as we knew it. The four of us dressed as warmly as possible, pulled on our cross-country skis, and set out for the corner store to buy some food. But no trucks had been able to get through since the storm had hit, and none were expected for at least another day or two. So, we bought the only items left on the shelves: candy bars and Cheerios, a treat despite the lack of fresh milk. The kids were thrilled. Frankly, so were we. Candy has a way of soothing the savage beast. Listening to the radio that evening, we heard that no less than a hundred faculty, staff and students had been stranded at the college, unable to get out when the storm hit. The cafeteria food lasted a few days, after which everyone invaded the vending machines.

​A week into the storm aftermath, the snow plows thundered through our neighborhood, oblivious to the cars buried in snow drifts. They managed to clear one lane for necessary travel on Main Street, leaving abandoned cars for springtime removal. We walked to the corner store, tractor trailers lined up to unload, with people lined up to buy food, milk, batteries, and, of course, coffee. Life returns to normal pretty quickly when you can brew a good pot of java on the gas stove top. People started visiting house-to-house to make sure neighbors were safe, especially the elderly. Luckily, on our street there were no tragedies. Phone service was restored, followed by the electricity, and houses could be heated once again. A hot bath was a luxury we all enjoyed. The Blizzard of ’77 had come and gone, but would never be forgotten.
©  Jeff Resnick  2018
All Rights Reserved
CLICK HERE to read Part 14